I do not know why the small router, looking for the whole network did not find the teardown map of Tenda mw6 Mesh, only buy it to open it. But before disassembling, I already have a lot of thoughts on the chip! Before testing ASUS AIMESS, I also need to find a reference object, so I bought it not only for the purpose of demolition, but also for the first step of comprehensive Mesh product comparison test. 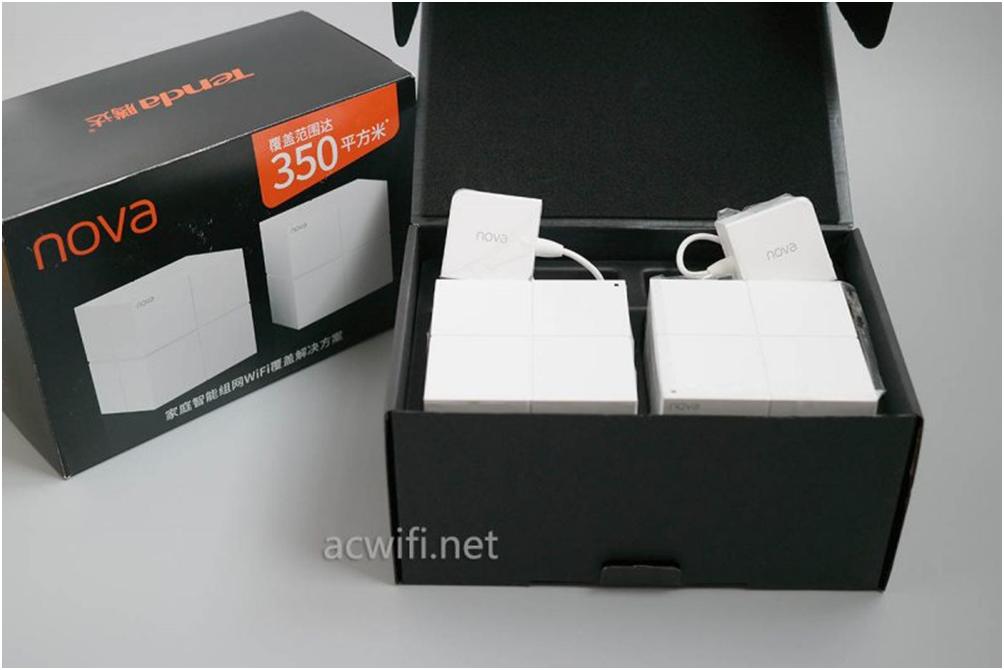 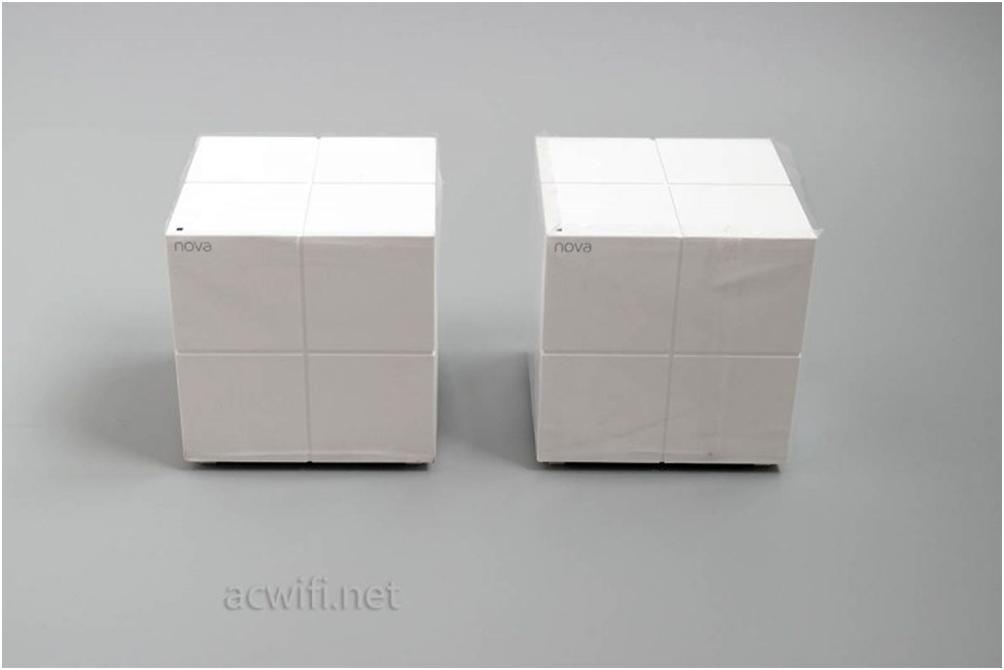 Out of the box and the appearance of the map is not much, the online guns and hydrology a lot. I bought a pair, the space is not big, just need a pair is enough, estimated!

The interfaces are all at the bottom, with only 2 interfaces, automatically identifying the WAN or LAN port, or both are LANs. It is said to prevent some friends from plugging in the wrong WAN port and not being able to access the Internet. A router without a USB port uses a 1.5A power supply. 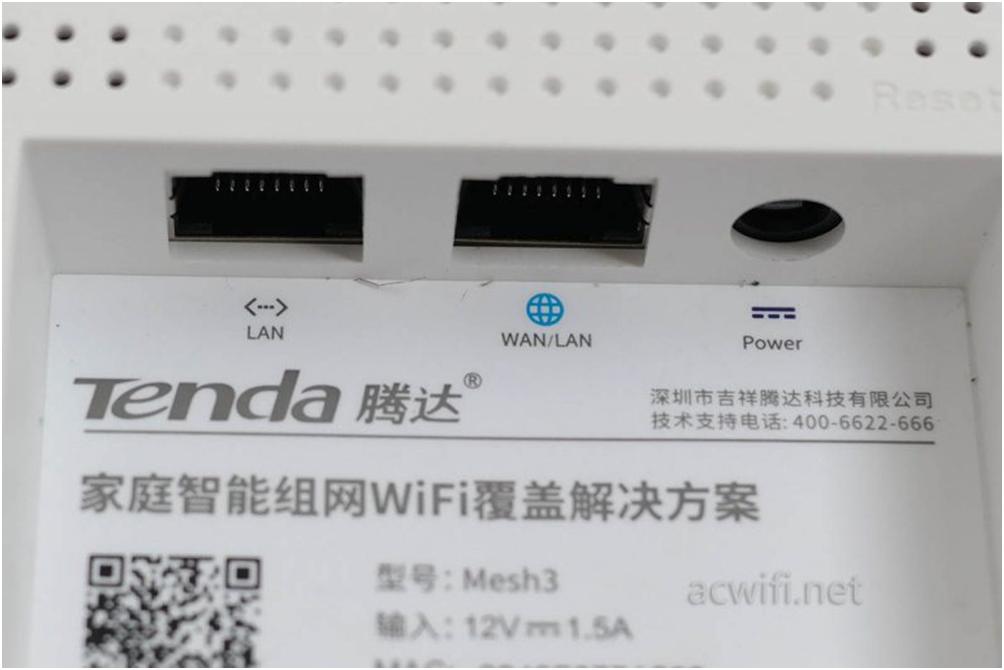 Remove directly from the bottom. 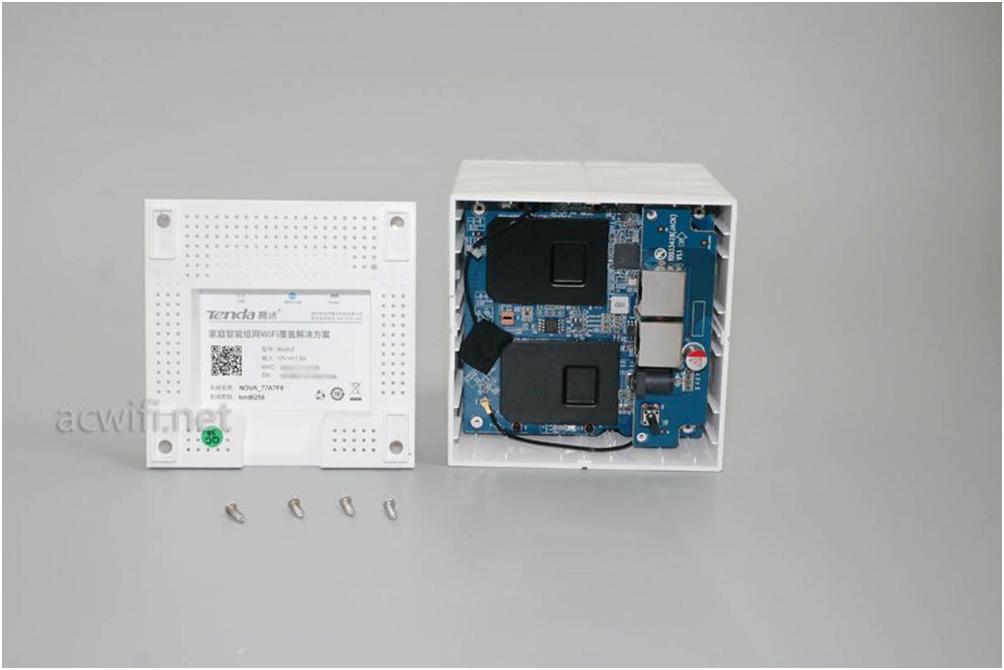 I have seen the motherboard, the metal shield on the chipset, or the black cover. Closer to see, I have caught a crab. 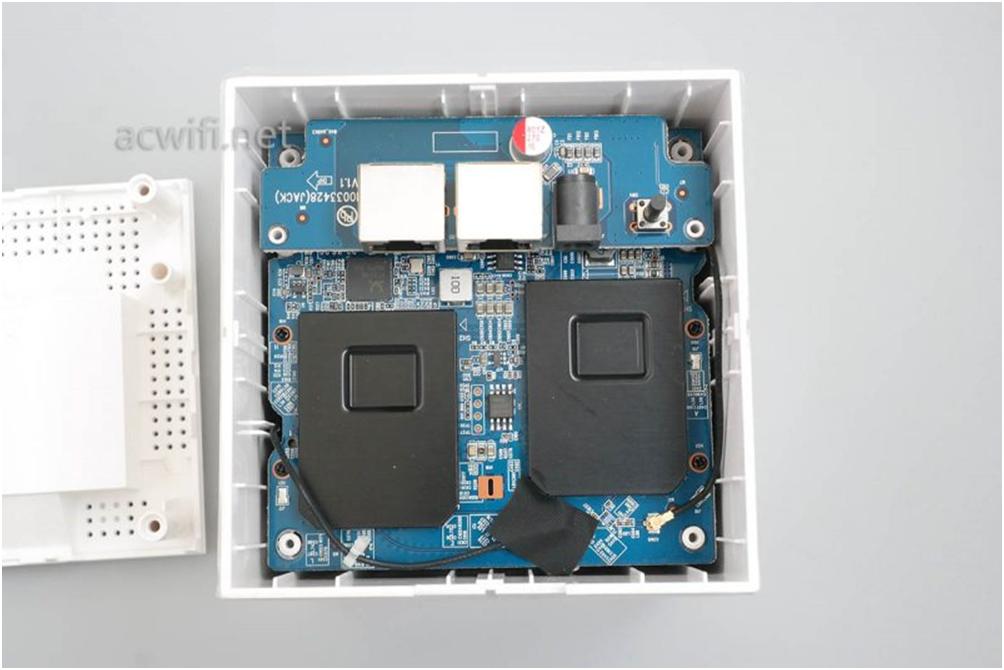 Remove the antenna and remove the motherboard. 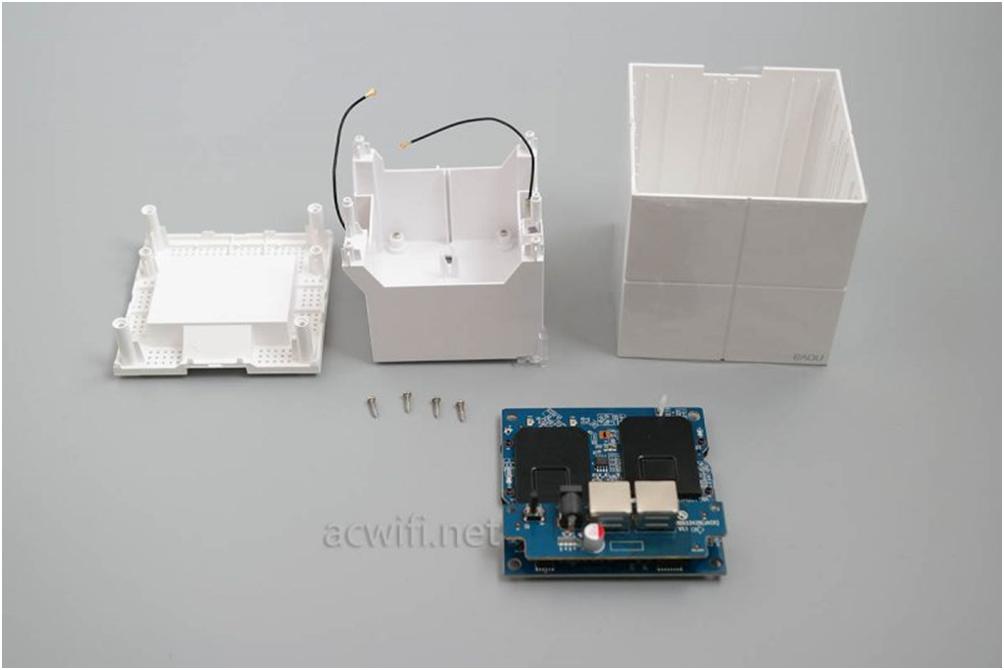 Look at the two built-in antennas and look familiar, as if you have seen them. A bit like the antenna design of the ASUS Lyra Trio. 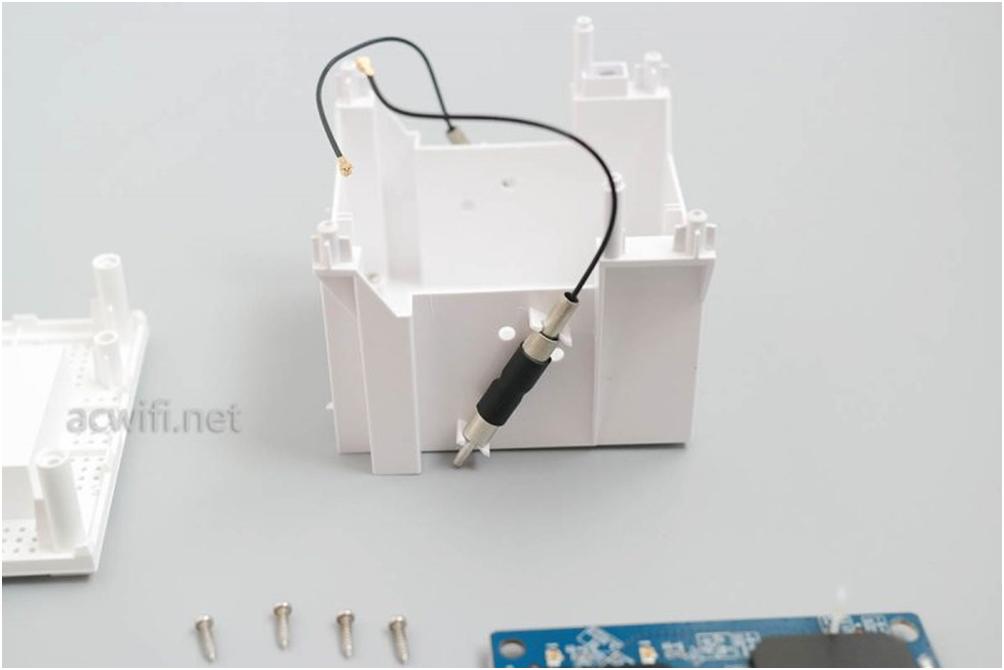 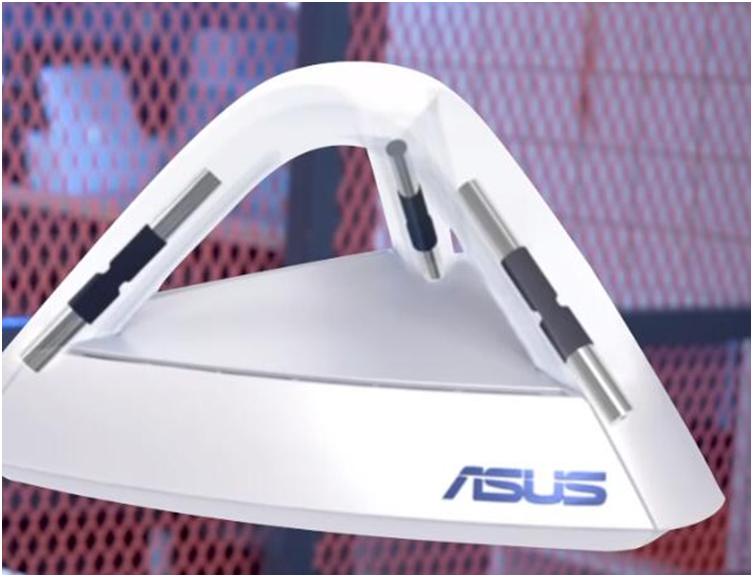 Take a few dollars to buy the ASUS antenna comparison, Tengda MW6 antenna is obviously thick, the antenna is not vertical, but has a certain angle of inclination, which is conducive to the coverage of the upper and lower space.

The network port board is connected to the motherboard. 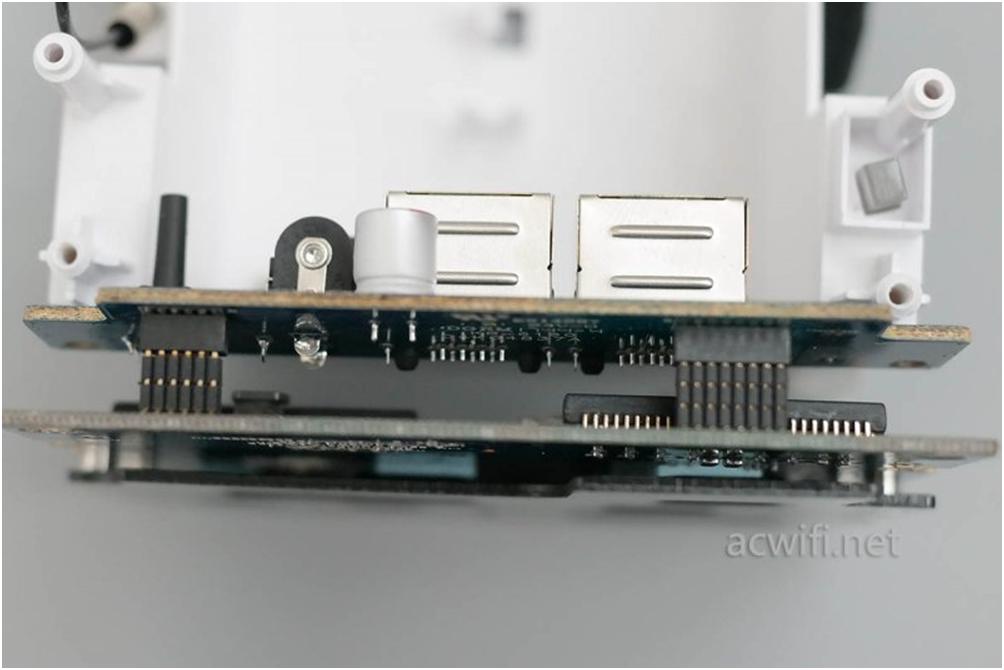 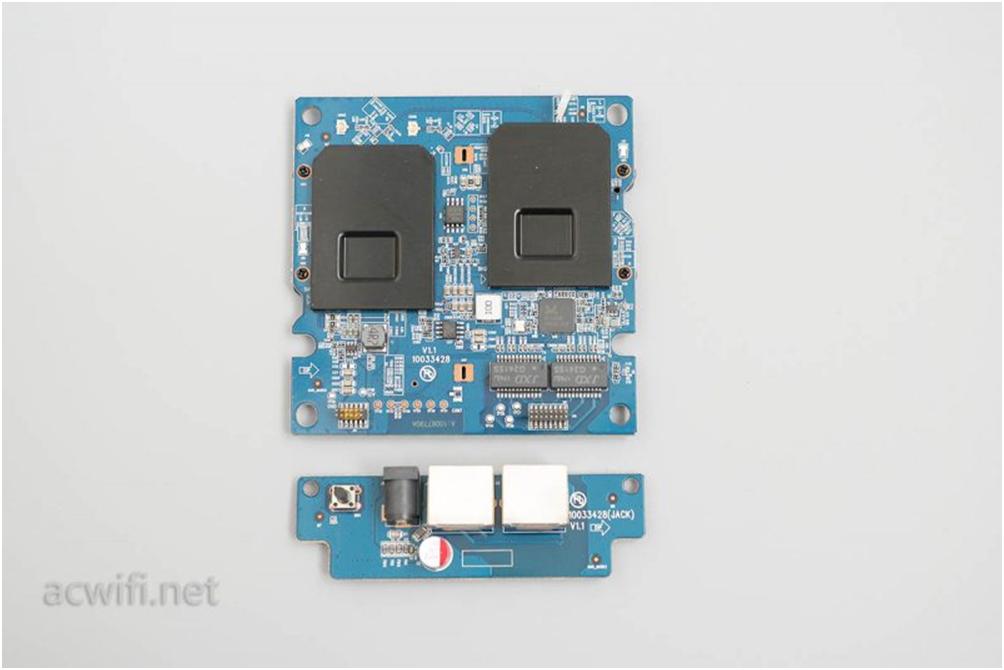 After the two boards were separated, there was a large piece of metal on the back of the motherboard. At that time, I forgot to take the magnet to absorb it. I don’t know if it is aluminum or iron. 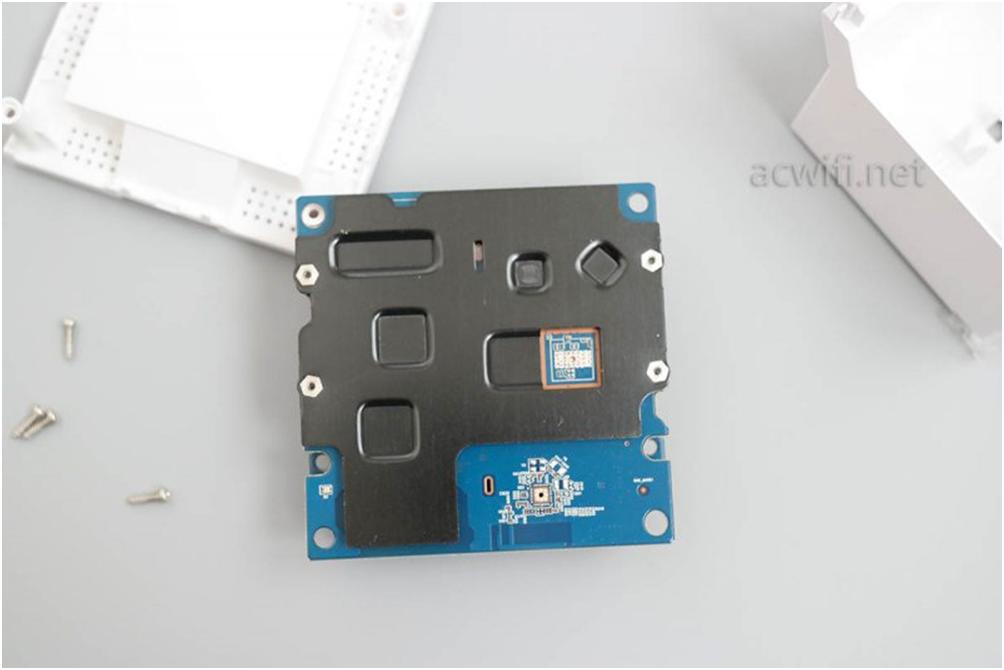 Unscrew the screw and pull open the metal plate. 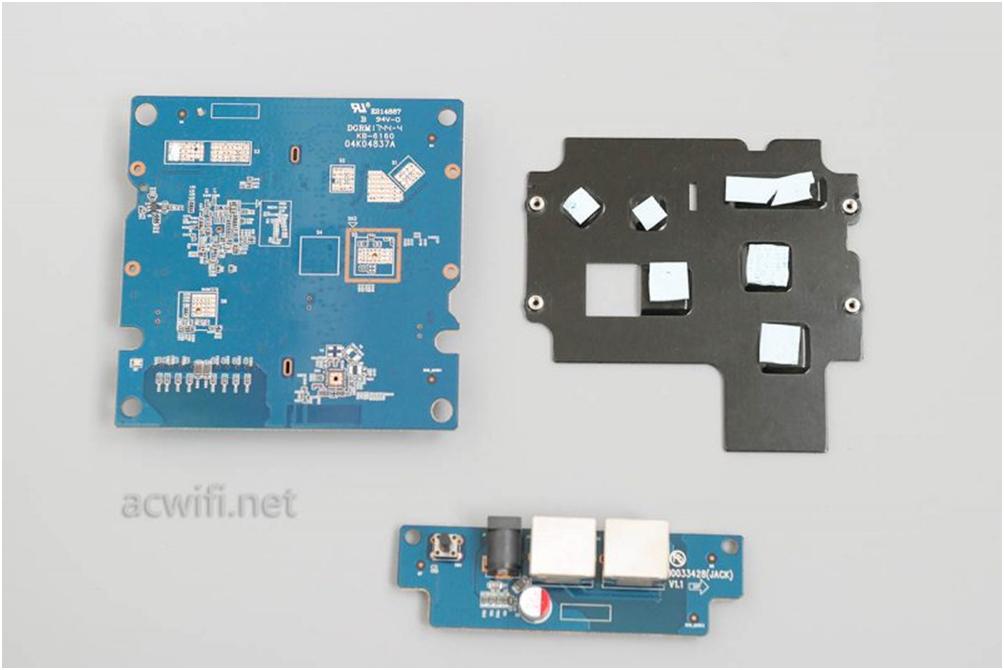 Go back to the front and remove the shield 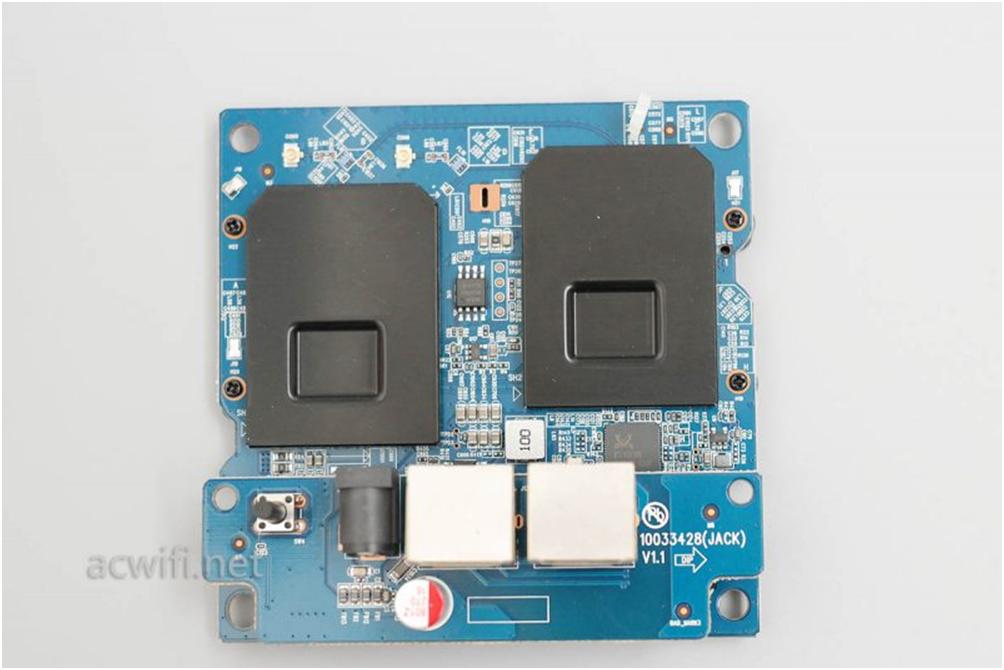 You can see all the chips. 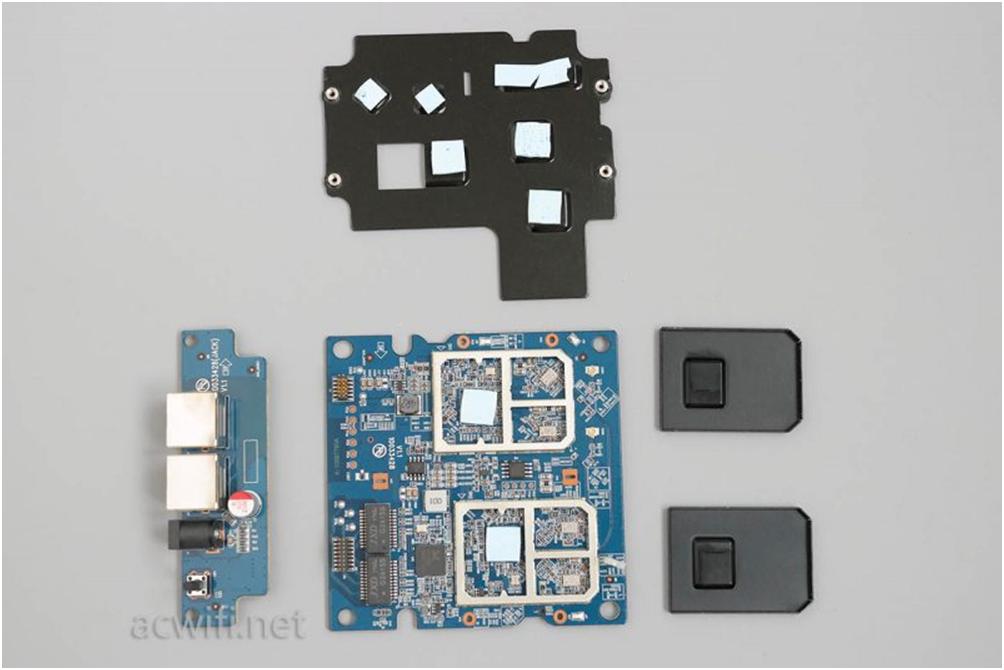 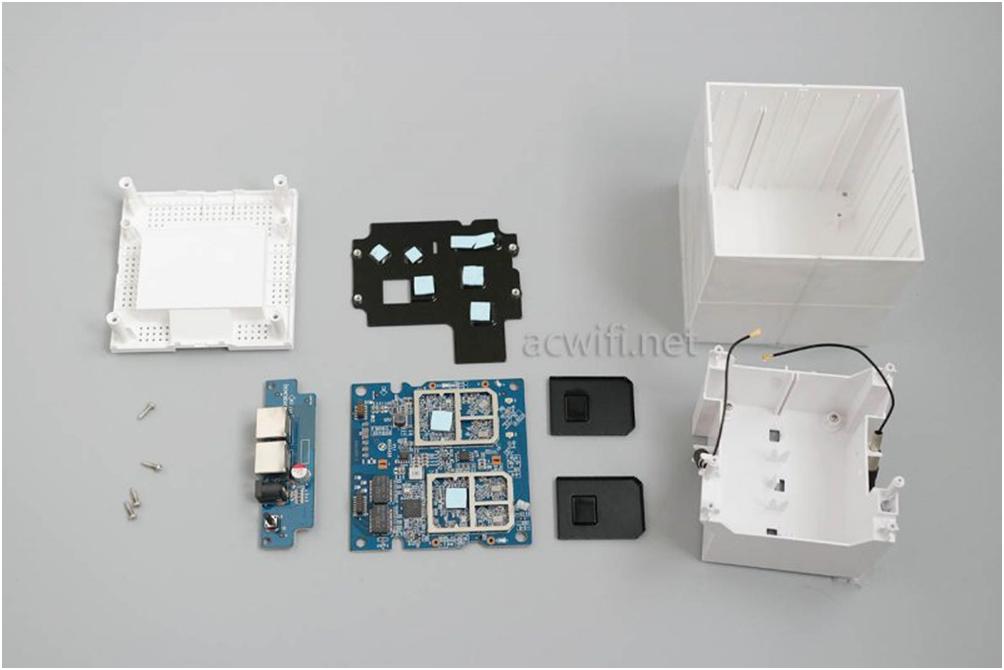 Look at the key points, the whole picture of the motherboard. Both 2.4G and 5G have two peripheral power amplifier chips. In appearance, the first time I saw this.

The chip is shown below: (Click to view larger image) 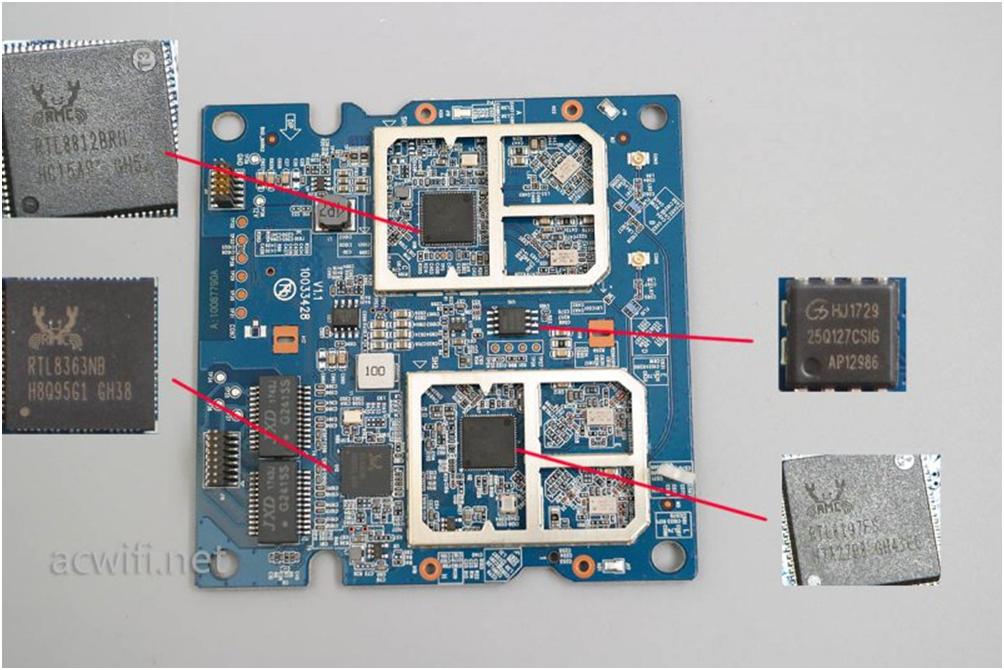 The CPU is RTL8197FS, frequency 1G, responsible for 2.4G, built-in RAM, it is not clear how much memory capacity, there is no separate memory chip. The 5G chip is RTL8812BRH, the Gigabit switch chip is RTL8363NB, the flash ROM model is 25Q127CSIG, and the capacity is 16MB.

Partial magnification to see the four power amplifier chips is something: 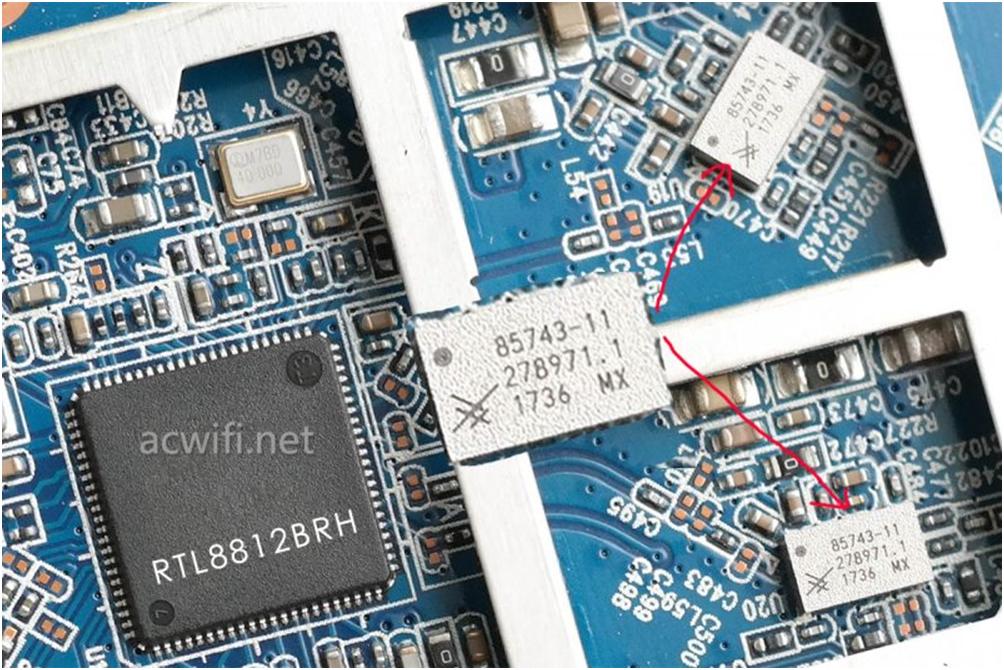 The figure below shows the 2.4G power amplifier chip, which is also the SKY85331-11 from Skyworks. It also integrates LNA and PA with a gain of 33dB. 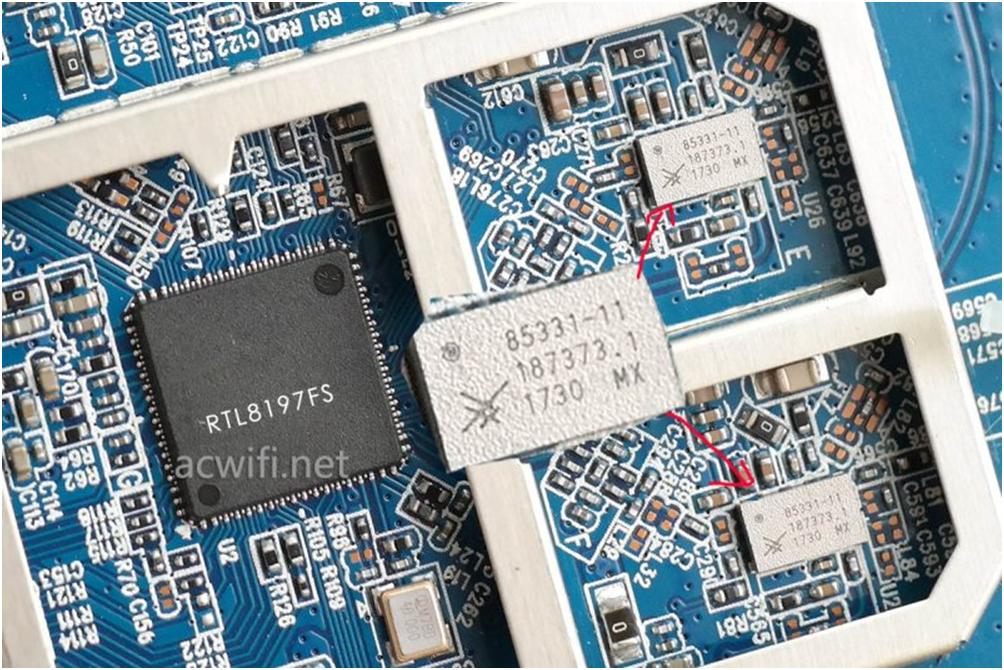 It is estimated that these two power amplifier chips will appear frequently in future AX routers.

The appearance of the amplifier is really beautiful.

Tenda mw6 has been dismantled, why only one is removed? In fact, both the two or three, are the same body, regardless of the main and deputy. MW6 and AC10 are exactly the same wireless chip and CPU, but the price has doubled,  However, all MESH routers are more expensive, but the hardware is not a high-end chip. For example, the hardware of two ASUS ACRH17 can be combined into a set of mesh parts Orbi RBK50

About the evaluation of Tenda mw6, a few days later. Because these days have been testing mu-mimo, never stopped, not a simple route and two or three network card tests, but different combinations of several routers and several network cards, mobile phones, different numbers of tests . I also bought some new network cards for this. One of the test computers often has a blue screen (win10). I need to change the motherboard. These are still on the express road. This mu-mimo test will have new discoveries.