The NETGEAR netgear R7800, a top-level hardware platform that represented Qualcomm at that time. Its configuration is probably:

There are also 2 USB3.0 ports and 1 esata interface. 4 Gigabit LAN ports, 1 Gigabit WAN port, but unfortunately the network port does not have metal shielding, which is not as sophisticated. It is cheaper than the R7000 and R6800. 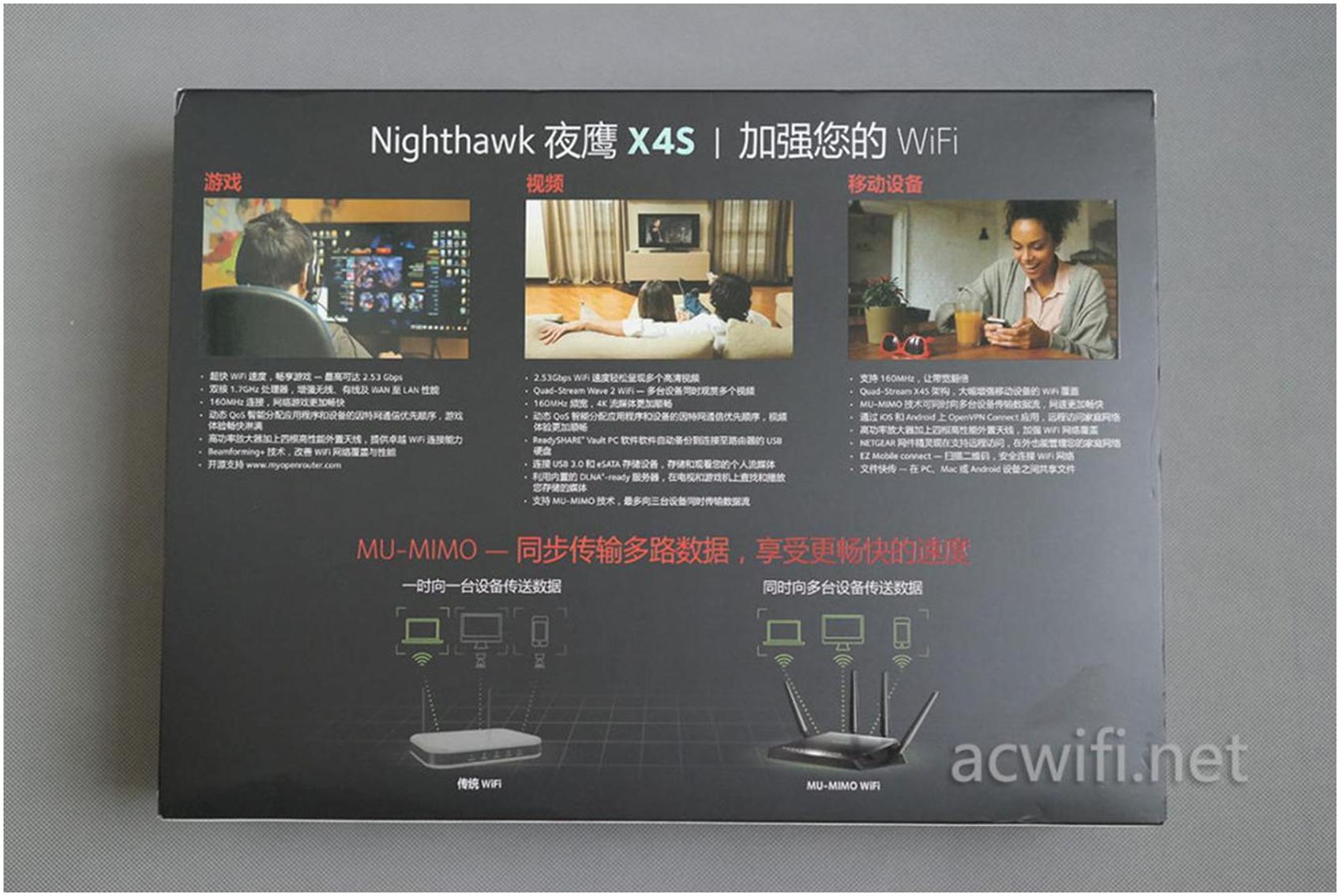 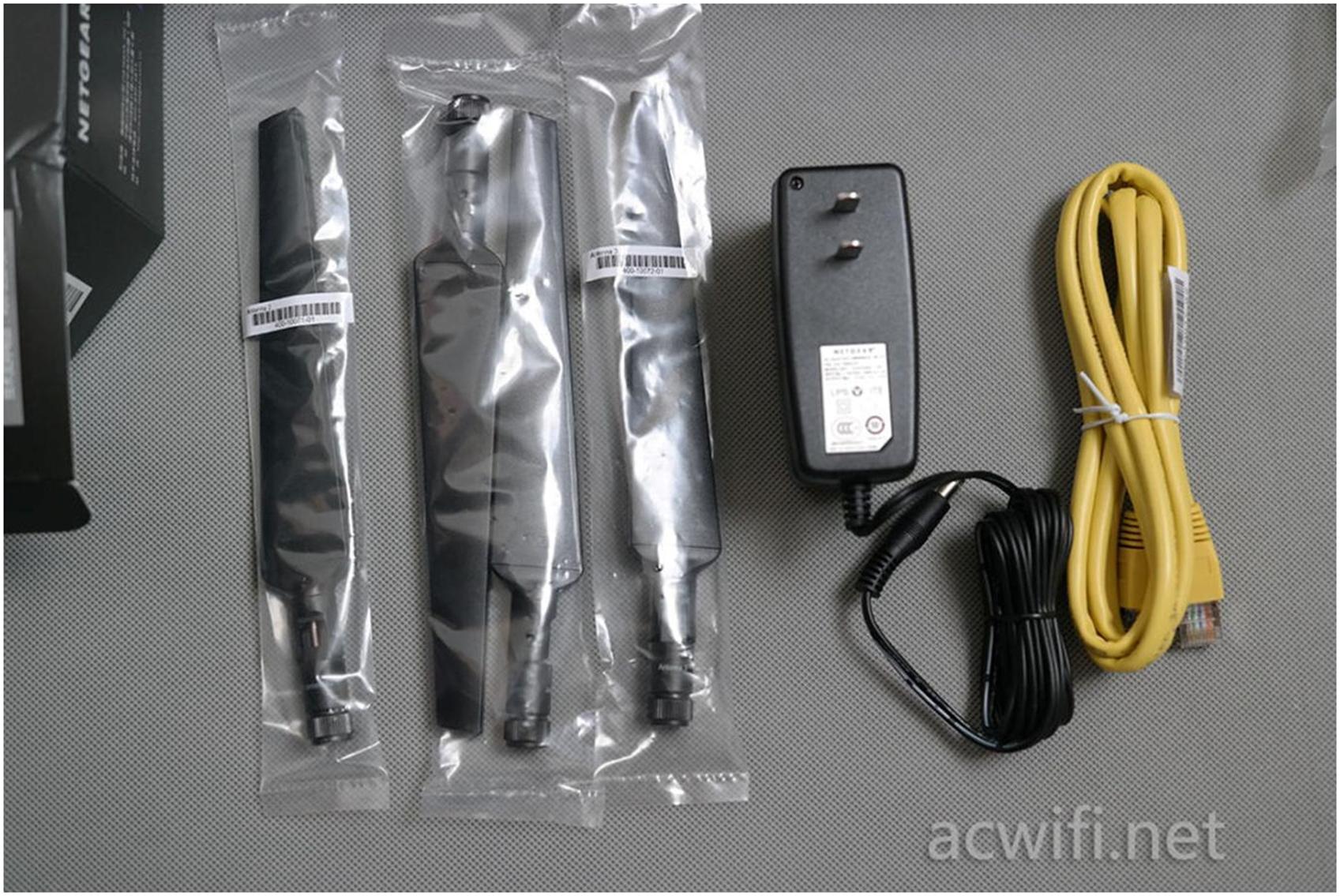 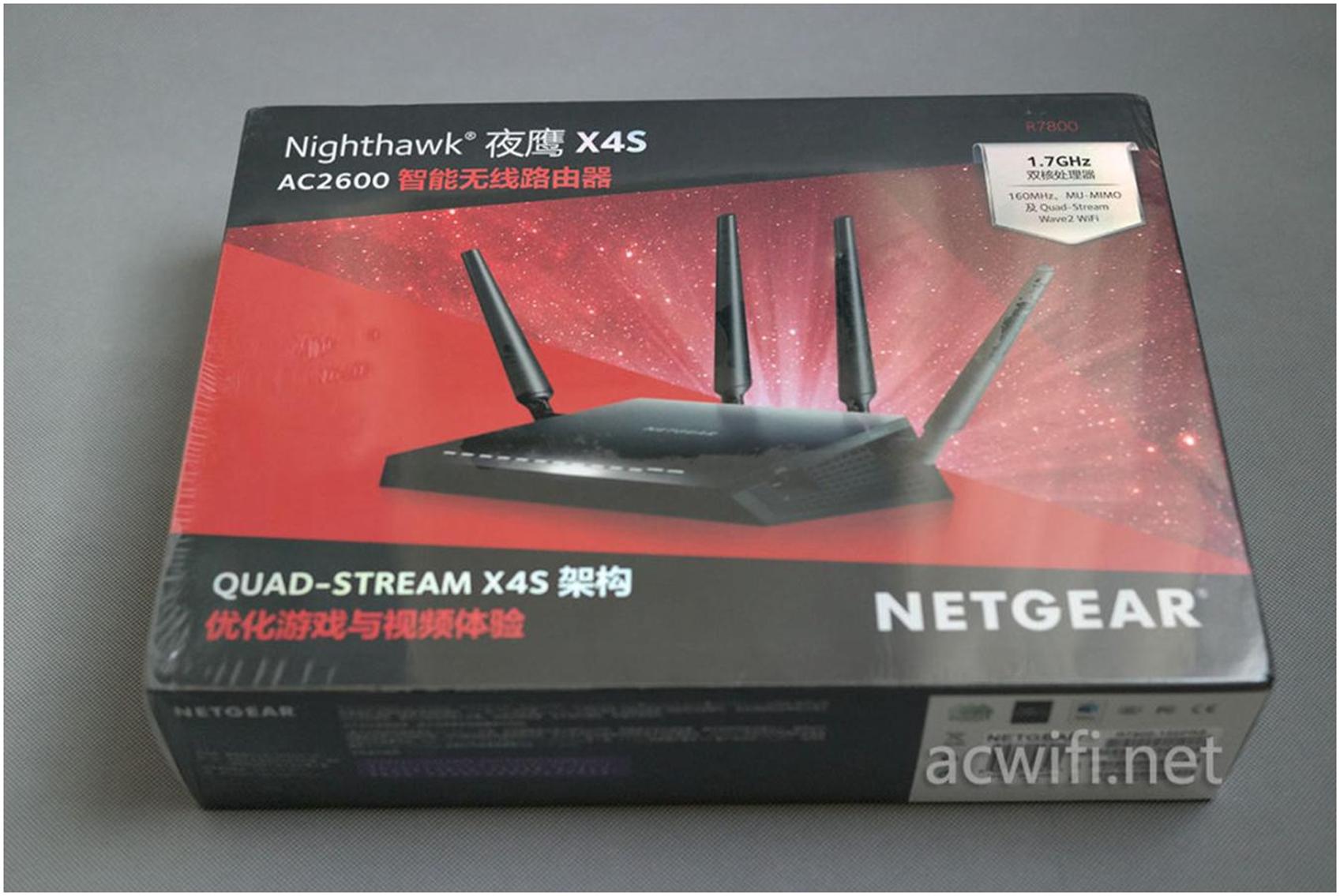 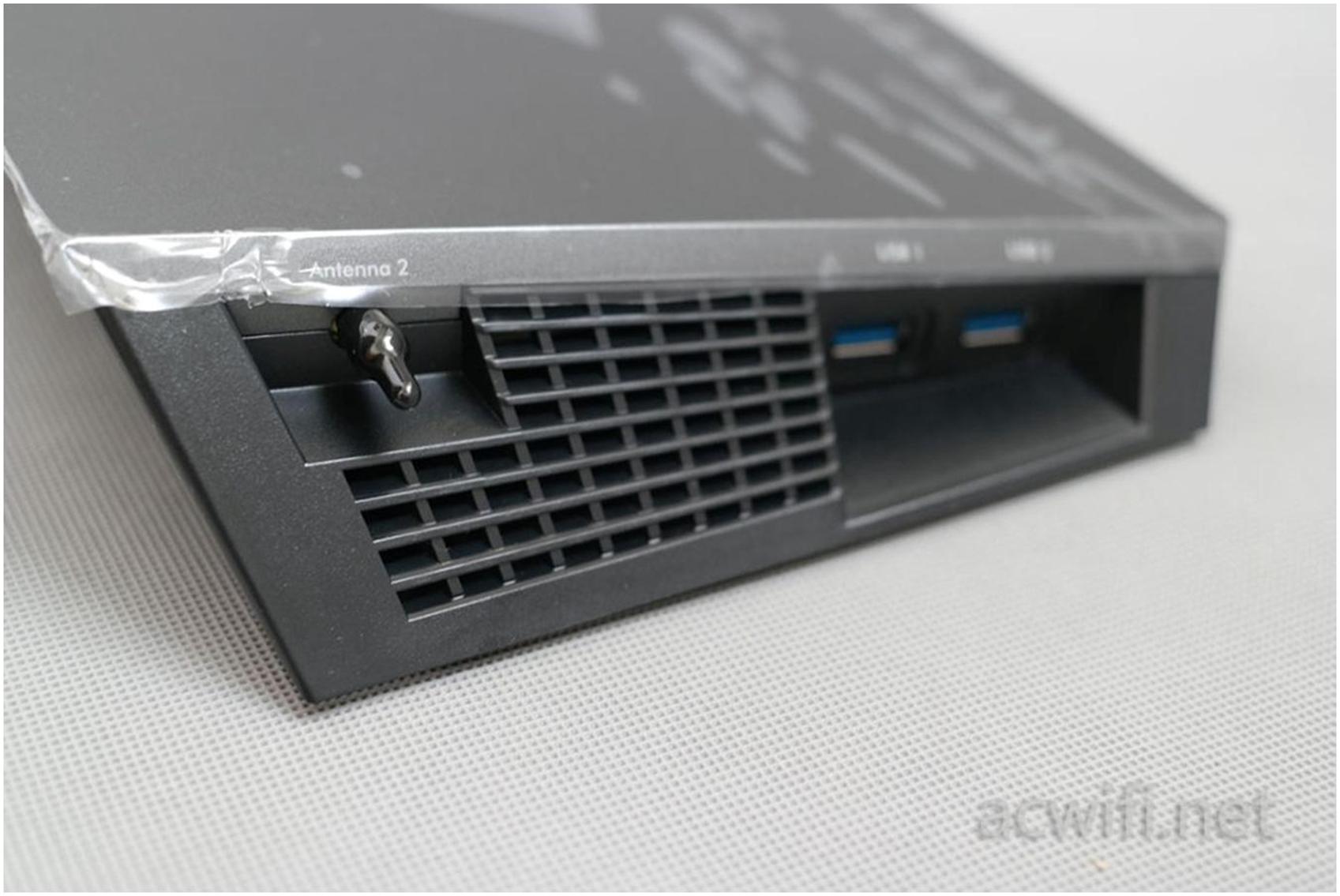 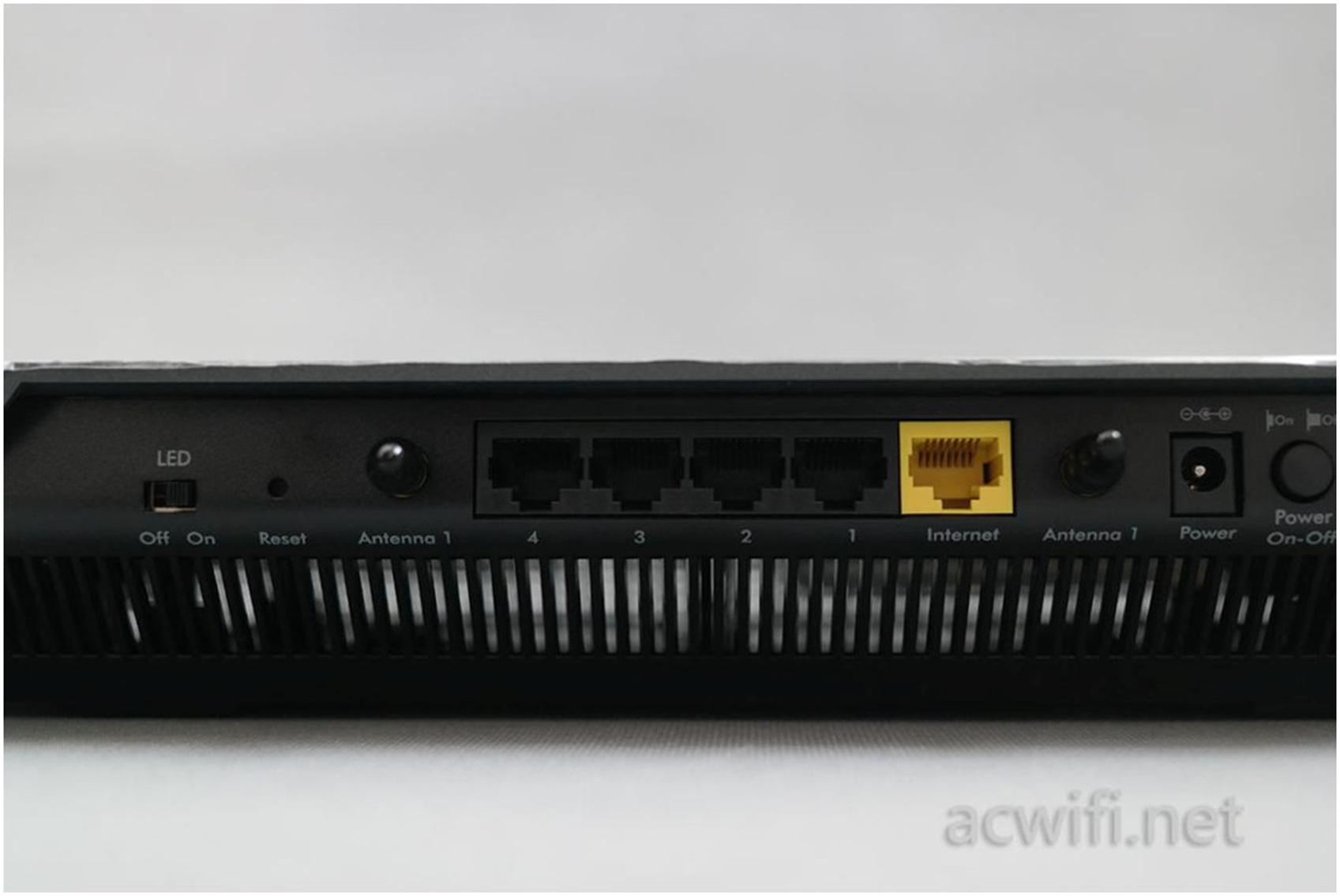 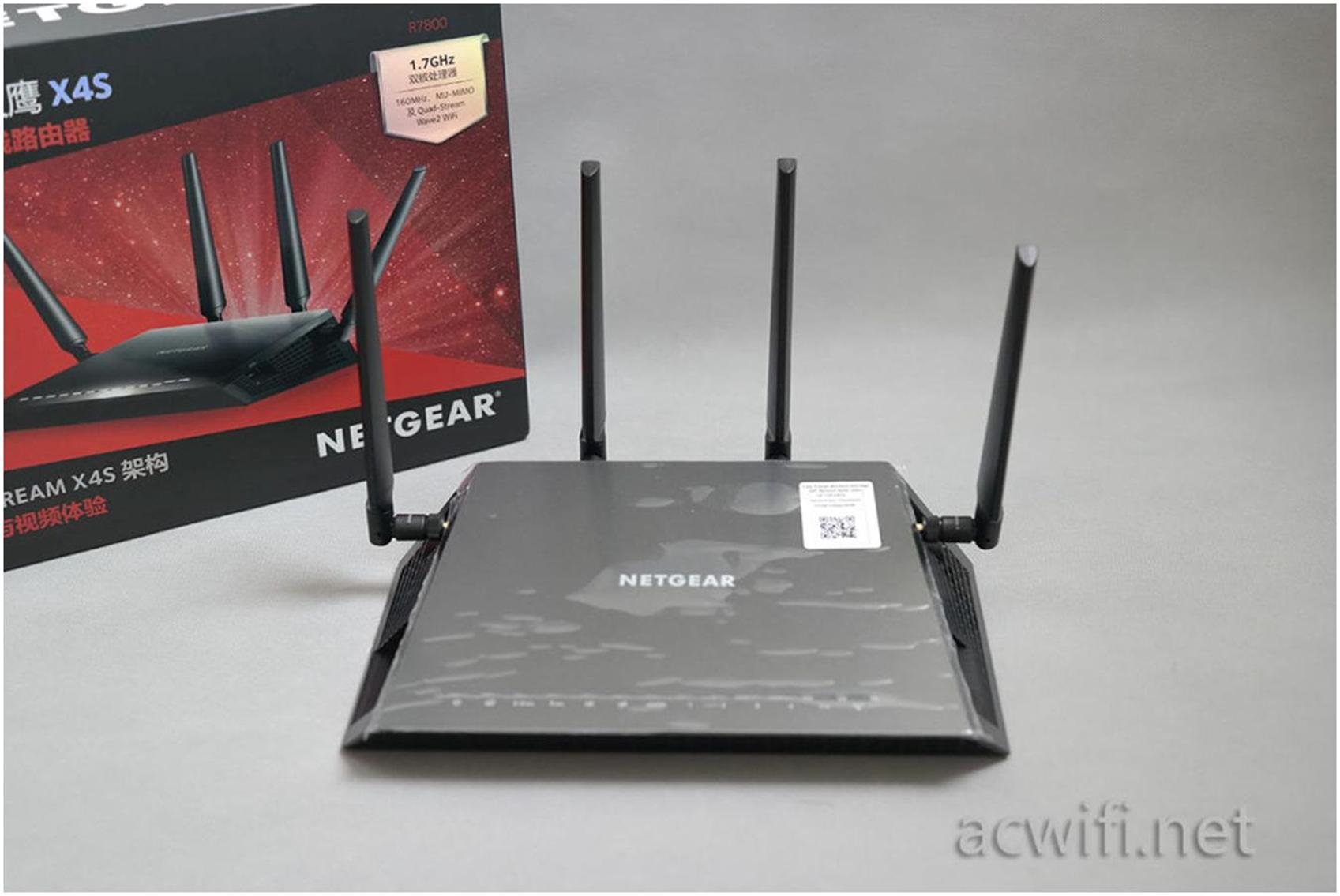 Like a 1.7G frequency CPU, the USB3.0 interface can operate at a higher transmission rate. The QC9984 wireless chip supports many advanced technologies, first supports MU-MIMO; supports a bandwidth of up to 160Mhz; Supports 256-QAM modulation, which allows 4x4m 2.4G to achieve a connection speed of 800Mpbs, while 5G supports up to 1.7 Gbps connection speed, of course, is not the highest, the highest Broadcom chip, can Support 1024-QAM, allows a maximum connection speed of 4x4mimo 2.4G and 5G of 1Gbps and 2.1Gbps, such as Fibonacci K3 and ASUS AC88U.


And as the biggest selling point of the R7800. It should be your dynamic QOS. It is hardware QOS, even if QOS is enabled, NAT performance will not have a big impact. 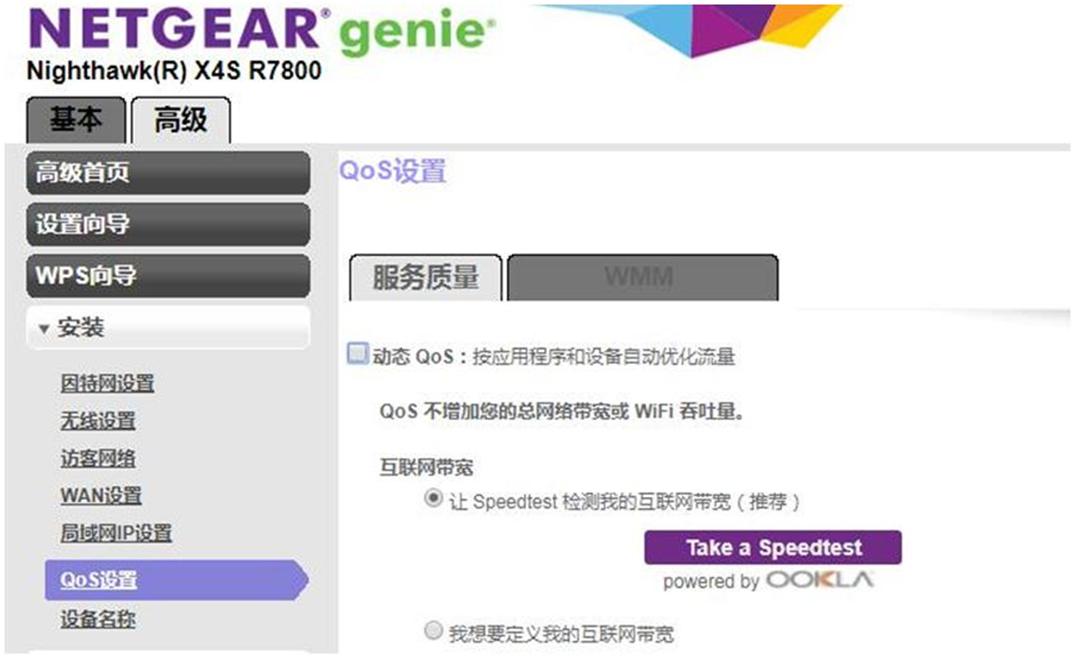 The data is wonderful and I don’t know what the real test will be.


If I use the quick copy tool for normal tests, I will copy the USB speed. The speed will be very slow, but the reading is only 40 MB / sec. It’s a normal speed with the simple copy and paste operation of the windwos system, but I don’t like this speed measurement. Because the R7800, or because the NETGEAR firmware itself is configured to support FTP sharing. As it’s shown in the following:

Activate the FTP service and use the flashfxp tool for the transfer speed test.


The test uses a 1T mobile hard drive with USB 3.0 interface. The speed on the computer is 93 MB / s. I don’t have a U disk that is more suitable for testing. It is estimated that the mobile hard disk is the bottleneck. No way


First test the computer network cable to connect to the R7800 LAN port, USB3.0 read and write speed as shown below:

The read speed is 91 MB / sec and the write speed is 79 MB / sec. This writing speed is already fast. It is much faster than the R7000. 91 MB may be the bottleneck of the mobile hard disk and the reading speed may be higher.


Then, use the wireless network card to read USB3.0 and see how fast it is.


The USB3.0 write speed of the R7800 is significantly faster than the Xiaomi HD router, perhaps the highest CPU frequency.


The test process is a bit cumbersome, because the transmission speed and speed are unstable, and the R7800 and the AC88 network card can be too strong and there is interference between them at close range. Is this what it is? I do not understand Anyway, the results of the speed measurement are not as good as I want. Also tested with two wireless cards.


Let’s take a look at the results of the ASUS AC88:

The 2.4G connection speed jumps between 600-800m, the transmission speed is very slow, only less than 40M / sec, I try to copy and paste with Windows, the speed is almost the same, up to 41MB / sec. I tried to adjust the wireless power of the R7800 to a minimum of 25%, and the result was slower. I also tried to disable the MU-MIMO option, which is up to 41 MB / sec.


Look at the 5G speed, the downlink speed reaches 110 MB / s, normal, this is caused by the bottleneck of the Gigabit network port, but the uplink speed is very tiring, how is 50 MB / less? It is not good to say that this speed is much worse than the Fibonacci K3.

The 2.4G speed is very good, how is the 5G uplink speed faster than the higher speed network card? Of course, the downlink speed still does not reach the speed of 867 m.


Is it unstable between Broadcom NIC and High Channel?


It is based on Beamforming or Beamforming technology. Achieve simultaneous data transfer to multiple devices simultaneously. That is, just connect 5G, and the receiver must also be compatible with muimo.


The configuration options on the R7800 are shown below. By default, Beamforming and Mu-mimo have been opened.

The MU-MIMO measurement of the NETGEAR R7800 can be seen in this article: the most complete MU-MIMO measurement in history, a variety of hybrid device tests  , which is the  Most recent measurement of MU-MIMO chip routers, the results show that the R7800 is perfect Support MU-MIMO. In particular, the intel9260ac wireless network card is also supported. In fact, MU-MIMO has no compatibility problems between different brands (the actual measurement can be combined with the wireless network card of the intel chip and the crab chip). Only the difference between the two transmission devices can be admitted. After all, MU-MIMO is a protocol that Qualcomm has customized for some years. I wonder if Qualcomm left it deliberately, or is it a patent licensing issue.

Just talk about the option R7800 “Activate HT160”, it is a 160MHz bandwidth switch, which can increase the speed of the Intel9260 wireless network card 2x2mimo to 1.7Gbps, the measured transmission speed is surprising, reaching the speed of the Gigabit network cable. As follows:

When measuring the wireless speed, I also tested the power / power consumption of the R7800. Standby power is 7.7W. When there is 5G high speed transmission, the power is increased to 13.3W. Although it is high, it is lower than the BCM. The exterior of the housing was measured with an infrared thermometer at 37-40 degrees. (ambient temperature 32 degrees)

A friend asked me where this potency was measured. It was measured with the smart plug application: Hongyan (HONYAR) IHC8340B smart home terminal block smart home, Jingdong plug connector

Fourth, test the wireless signal strength of the NETGEAR R7800


Both are on the table in the WIFI location, and the distance is separated. Approximately 2 routers are separated by 40 cm, so signal interference is not serious, but cannot be tested without being placed together. Test the positions of the four points A, B, C and D at four points. Wireless network card I use intel8265ac, because this is just for the R7000 with Broadcom chips or the R7800 with Qualcomm chips.

The results of the signal test are as follows:

Position of point B, or stronger R7800

Position of the strongest C, 2.4G or R7800 point, the 5G signal strength is similar.

After measuring the signal, the signal strength is not enough. Then, observe the speed of the mobile phone. Broadband is one hundred megabytes of telecommunications, 5G is connected to the 5-meter mobile phone at a short distance, and the fastest speed of the application is approximately 150 m. This data is used as the basis. The 2.4G connection speed is 86m, and the maximum speed is approximately 65m.


Use speedtest to measure speed, record each value and test each signal six times, then take the average to compare. I made the table as shown below: 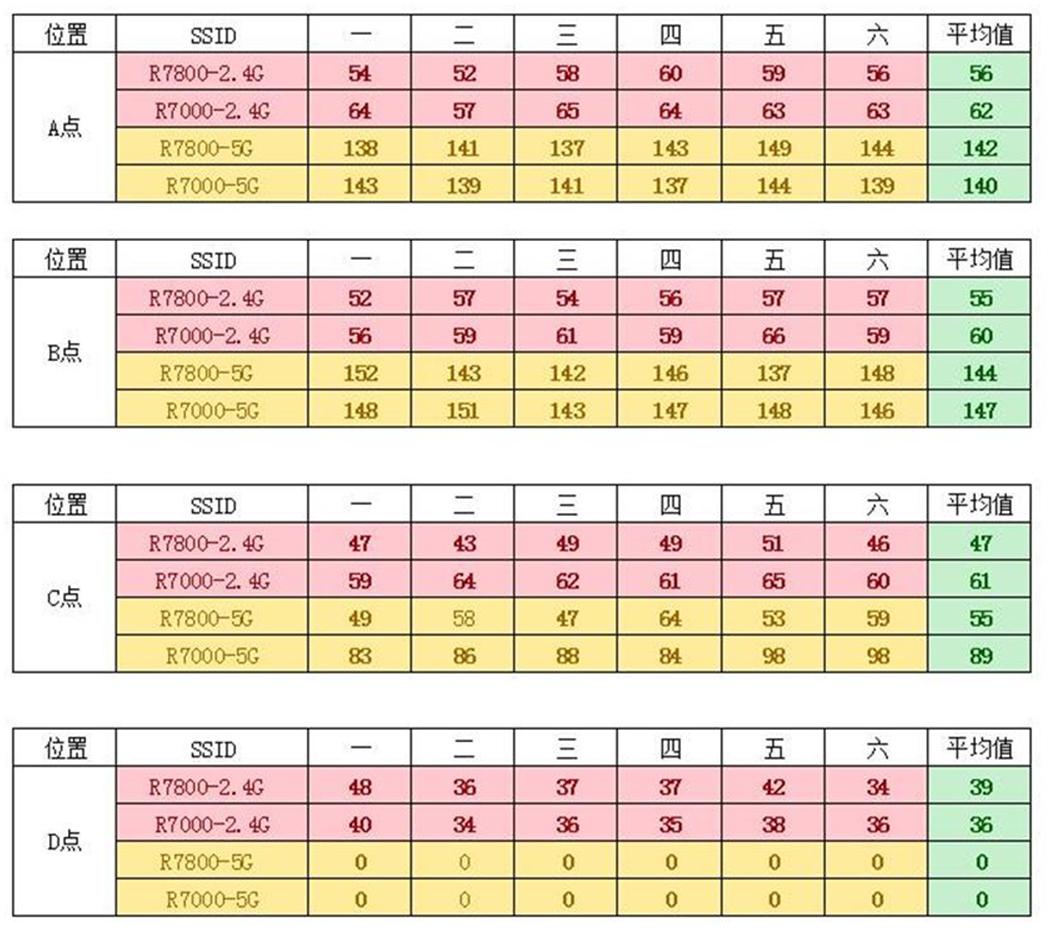 It can be seen from the data in the previous figure. The three positions of the same layer, the 2.4G of the R7000, are higher than the speed of the R7800. A short distance A and B, the 5G speed of the two is similar. At point C 10 meters away, the 5G of the R7000 is faster. In this position C, the 5G of many wireless routers cannot measure speed here, and the R7000 and R7800 No problem


Finally, at point D below, the 5G signal could not be seen. It will disconnect automatically when connected. The speed cannot be measured. The difference between the 2.4 points of point D is also similar.


Using the pce-ac88 wireless network card, wireless transmission speed test in each location, the results are as follows: 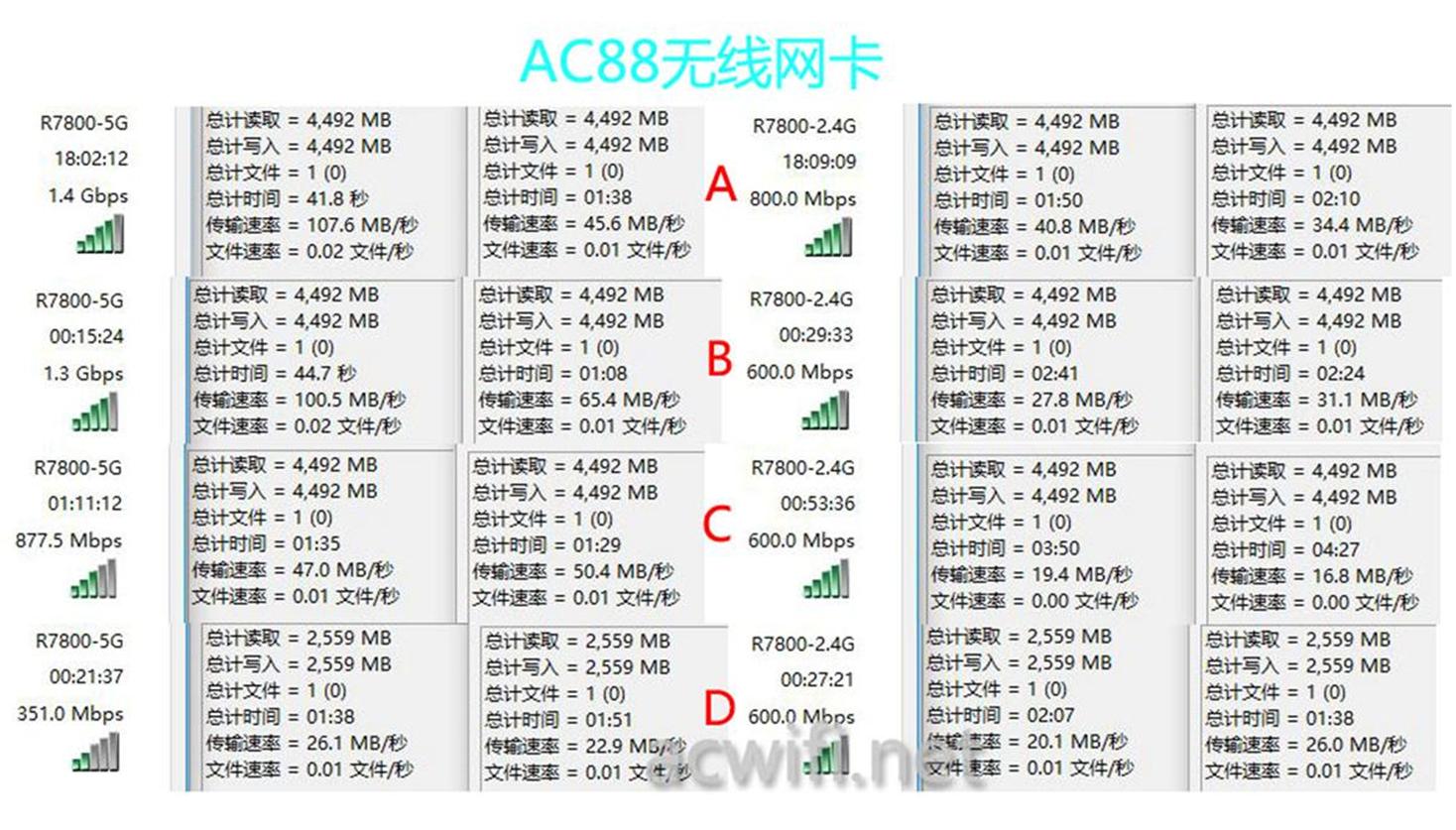 
At point A, the 5G downlink rate is still very high, and the uplink rate is similar to the test speed in the same room. 2.4G speed is still not ideal.


At point D, the 5G speed is slightly lower than point C. Normally, they are not at the same level. The 2.4G speed of point D is faster than that of point C.


In general, the 5G transmission speed is working well and the 2.4G is worse, in reality 2.4G should not only have this speed. . The Qualcomm path may not be very good with the Broadcom chip chipless network card. 2.4G speed always feels weird. I originally wanted to use the AC88 wireless network card to measure the speed of the R7000, to compare, but this is unfair to the R7000, because it is only 3x3mimo. . Then, the following still use the intel8265ac 2x2m 1200m wireless network card to make the speed measurement, so the connection speed is the same, just. And the chip has no advantage for anyone. Because it is an intelligence chip.

The data is a bit more and more complicated, because each point has to measure the speeds down and down of the 2 signals for 2 routes. I have listed the results. 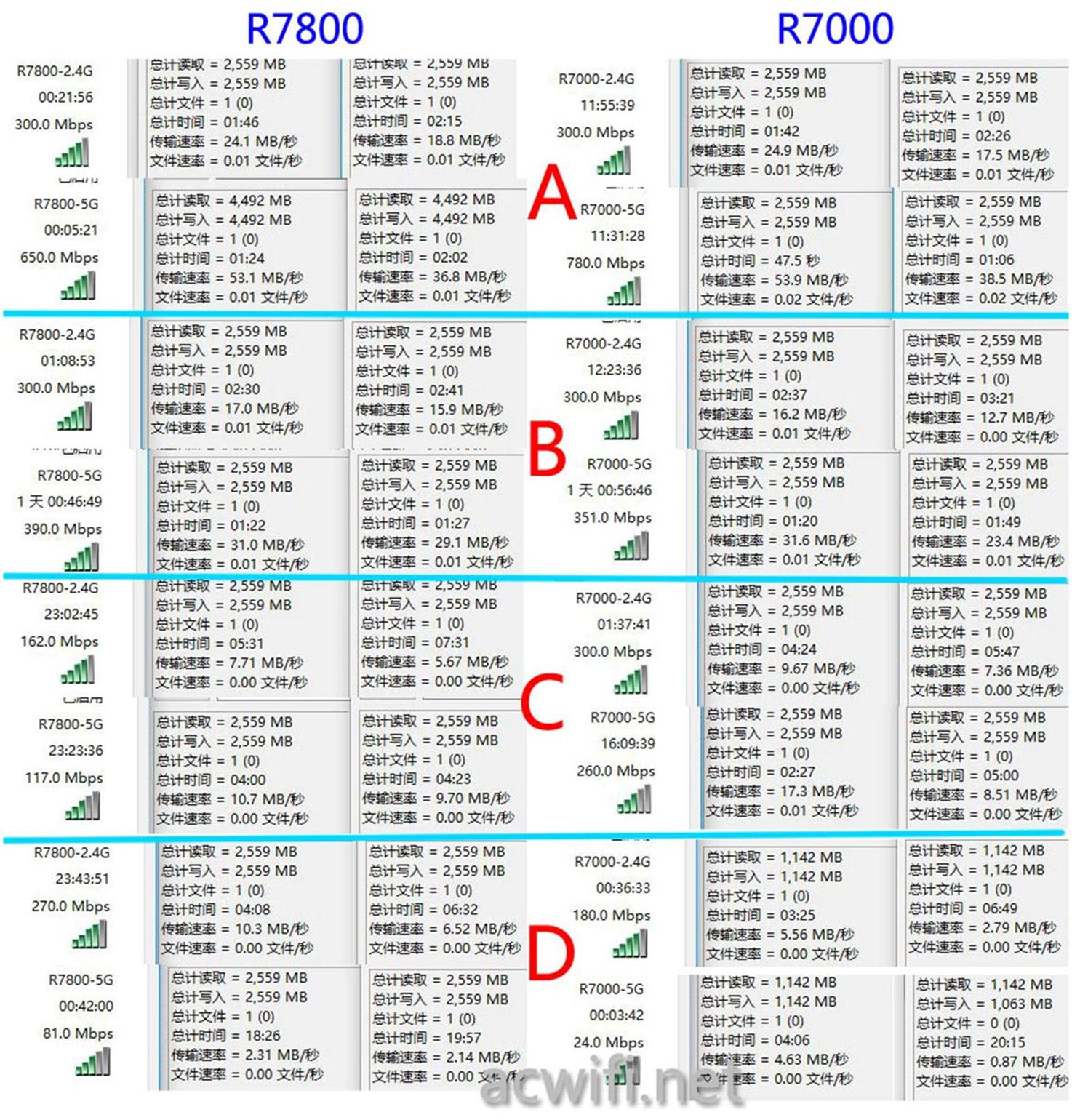 The biggest difference is the position of point D. The 2.4G speed of the R7800 is significantly higher than that of the R7000.


This test of quality of service is the first time, because the quality of service of the previous evaluation of the router is not a point of sale, the effect or the effect is not great. The dynamic QOS of the R7800 is the focus. As for the number of devices, I can’t do dozens of device accesses to test it. For some devices in general, I can still do it. For example, watching live TV broadcast channels, a computer watching Movies / TV series online, a computer that drives Thunder to download movies / files, a mobile phone that leads to Iqiyi watching variety shows, one or two mobile phones that play the glory of the king. Is this the scene? I often hear my friends say that while my parents are watching television on television, playing a king will be delayed a few hundred ms. He still couldn’t move and his teammates informed him. Or watch the live stream is a card. Wait a minute


Dynamic QOS, the default setting is not enabled, first test the actual use before starting, the specific equipment is like this: (100m broadband)


A Xiaomi TV is watching live TV shows, even 5G,


A laptop turns on iQiyi to watch the TV series, even the 2.4G,


Both computers work with Thunder download, and the sum of the two download speeds is between 10-12MB. Even the 5G.


A mobile phone opened Youku to watch the movie, even 2.4G.


I have a mobile phone in my hand, which drives the glory of the king. I will be in a diamond with a star, and I will climb the ranks, even 5G (both holes during the test).


The execution status of all devices is normal, watching the video is not a card, I do not play, it is always about 70 ms. I doubt it is not so open. Try a ping outside the network to see the situation:

Occasionally time runs out. In fact, the computer and the R7800 are in the same room. Even 5G is not a timeout caused by wireless quality problems. Because 2 computers are downloaded at the same time, the bandwidth is almost busy, but I have no experience with the king.Question 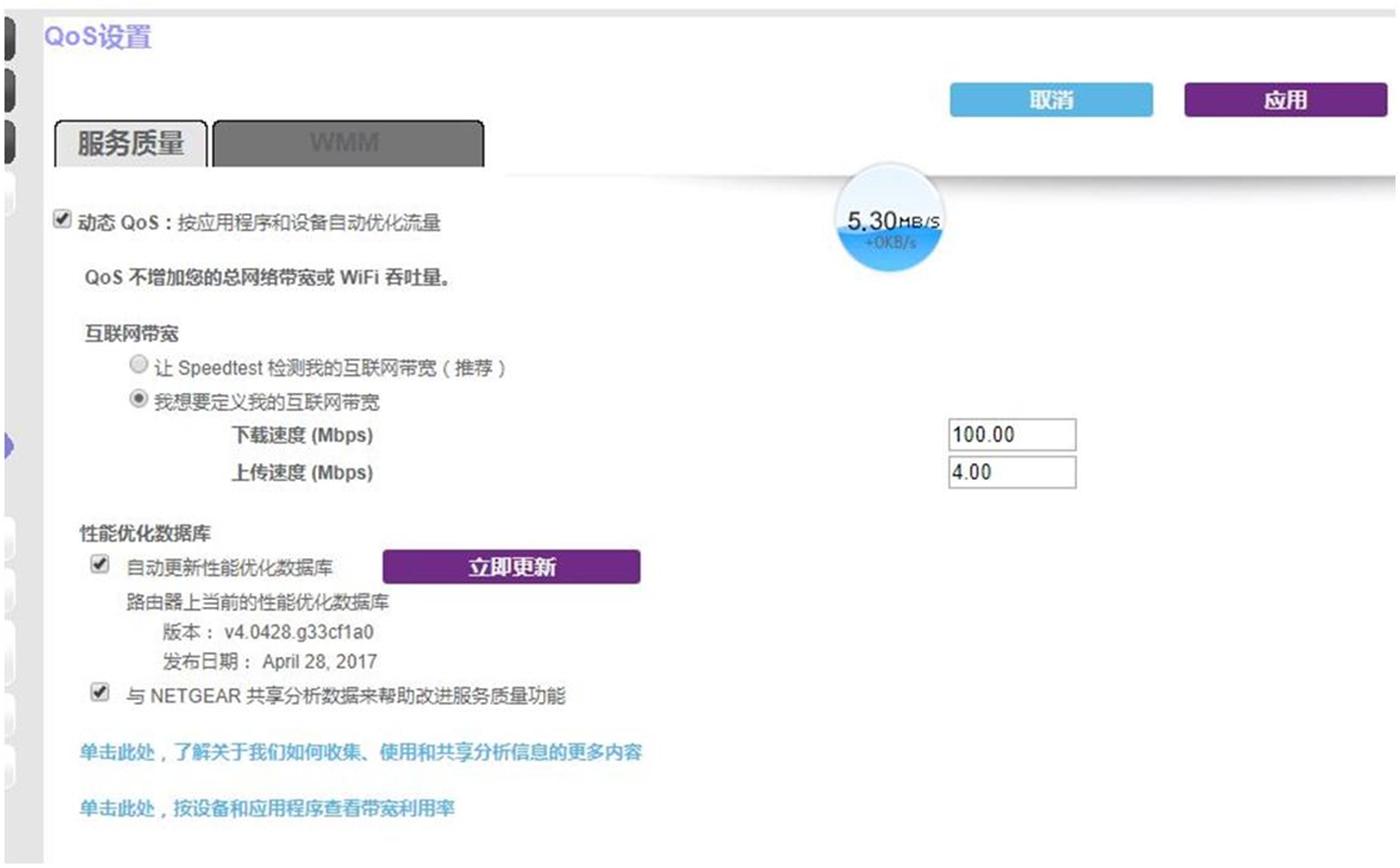 After activating the dynamic QOS, the PING delay is very smooth, there will be no waiting time and QOS will work. A beautiful feeling

Looking back at the phone, no, how can I not move, I see that the delay has been reduced to 400 ms, and then the lowest is approximately 110 ms. Very carda.

You can click on “View bandwidth rate by device and application” in the red box.