This ASUS AC66U B1, which came out in 2016, has a big upgrade with the older generation of AC66U, including CPU and 2.4G wireless chip, CPU upgrade to BCM4708C0, frequency 1GHz, which is more than AC68U CPU It is also 200MHz higher; 2.4G wireless chip uses the same wireless chip as 5G: BCM4360, which makes 2.4G support 256-QAM, and 2.4G wireless rate reaches 600Mbps, then the total wireless speed is the same as AC68U, but ASUS blocked the 256-QAM switch in the firmware, so it can only reach 450Mbps. If you change the version of Merlin, this feature is enabled by default. Then why is it nearly 200 yuan cheaper than the AC68U? Because there are so many components on the circuit, the AC66U B1 is much cleaner than the AC685U, but how much of these savings can have a significant impact on wireless performance and stability? Or will these effects exist? I don’t know, only those friends who have used these two for a long time know it. Wireless performance is easy to test, and stability is difficult to test. The next one will use these two models for comparison testing.

And it routes the 2.4G wireless settings option, directly has the option of 256-QAM 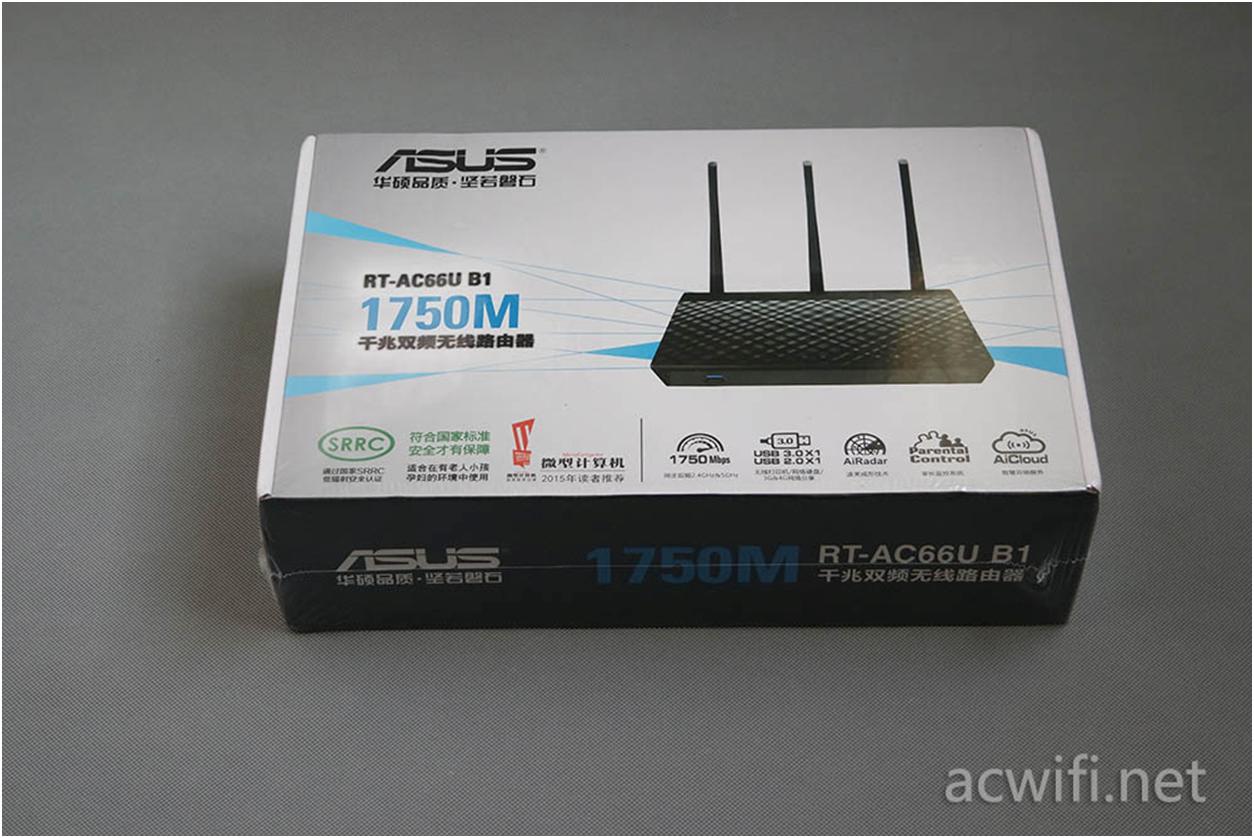 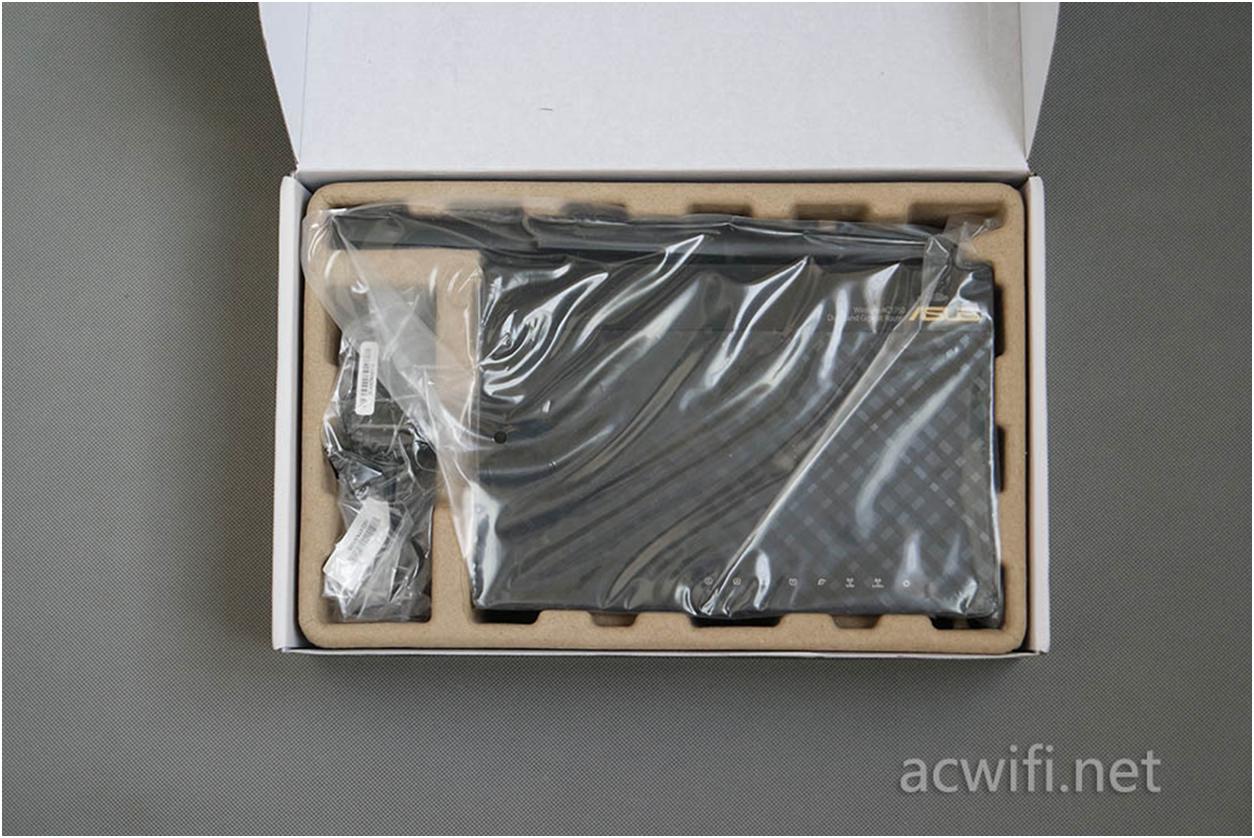 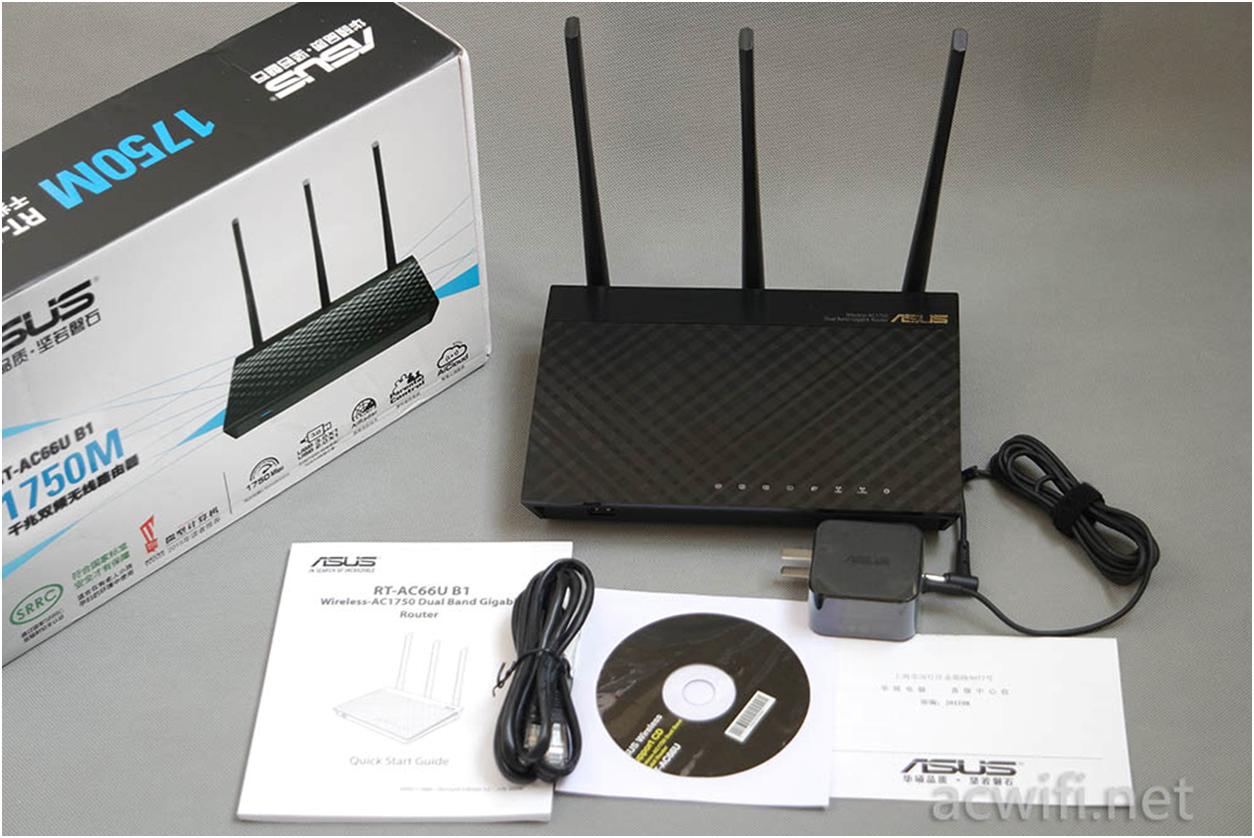 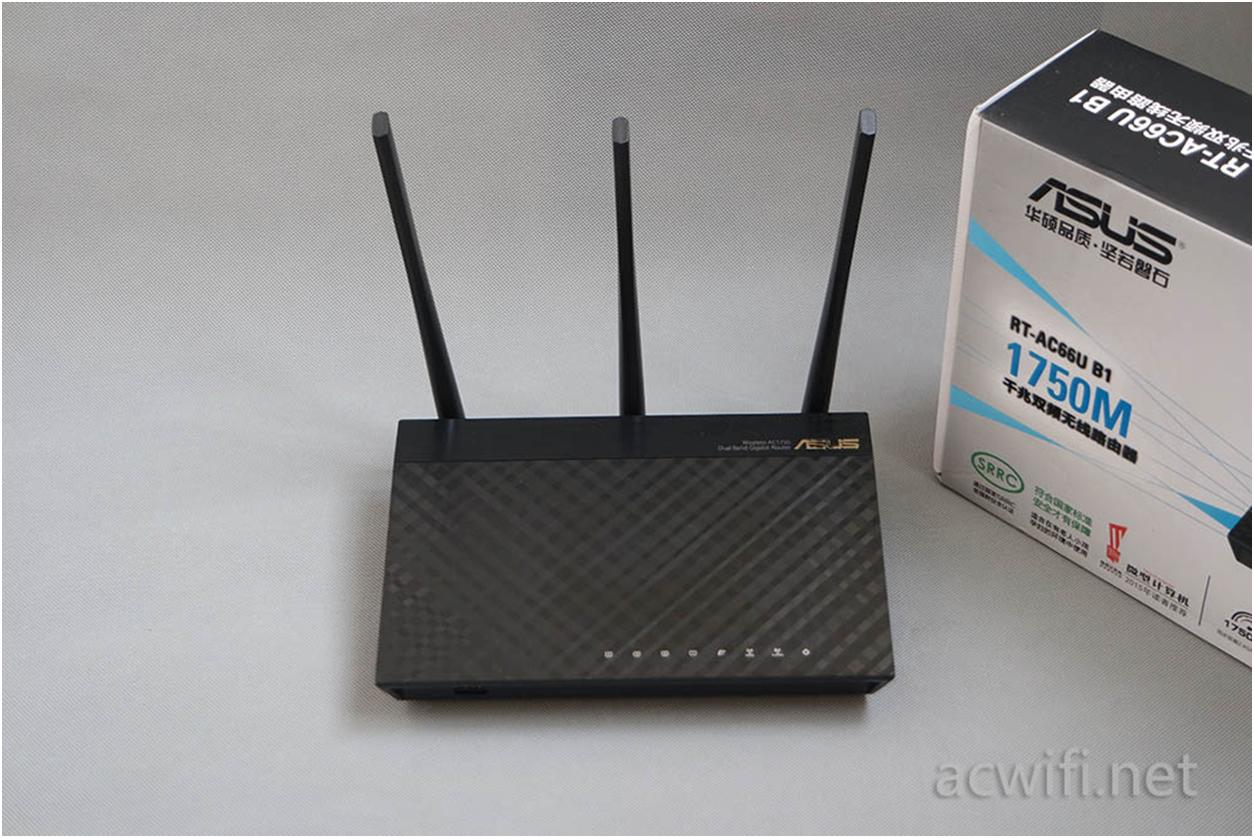 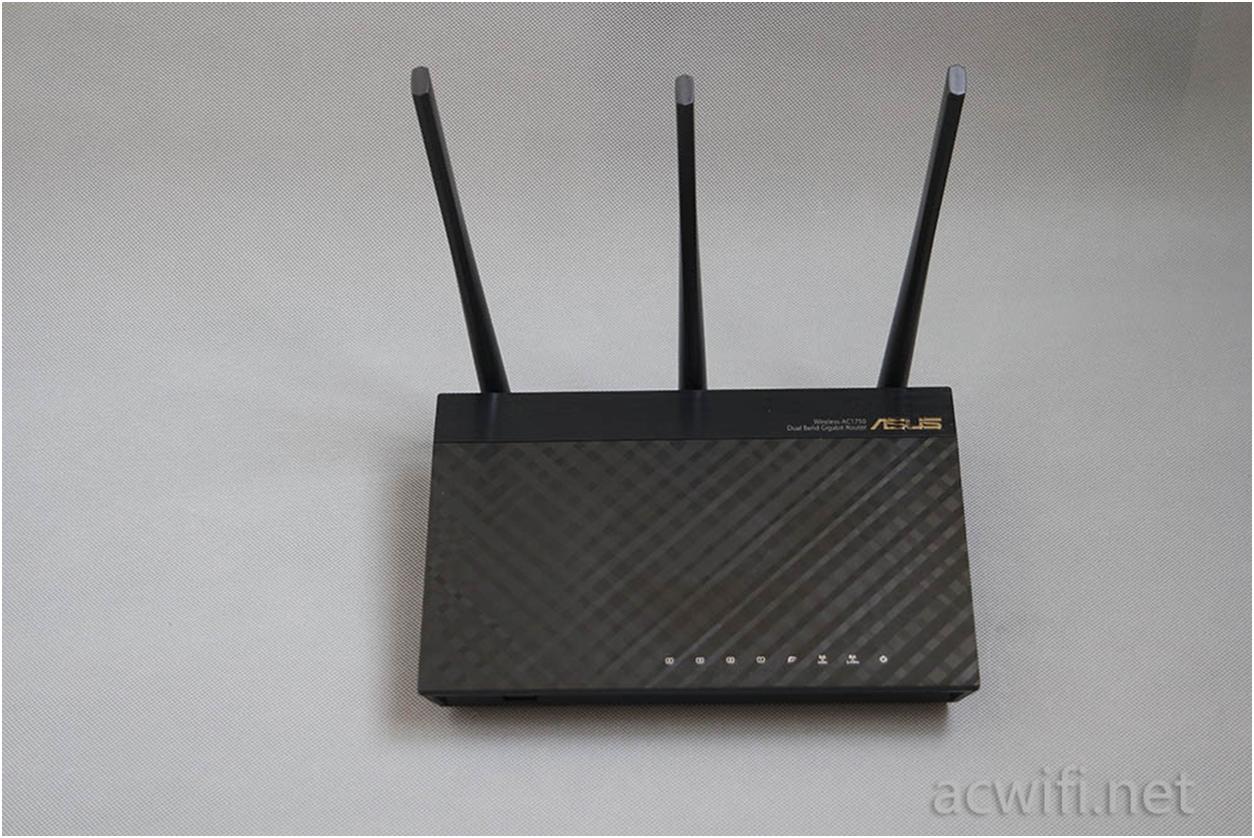 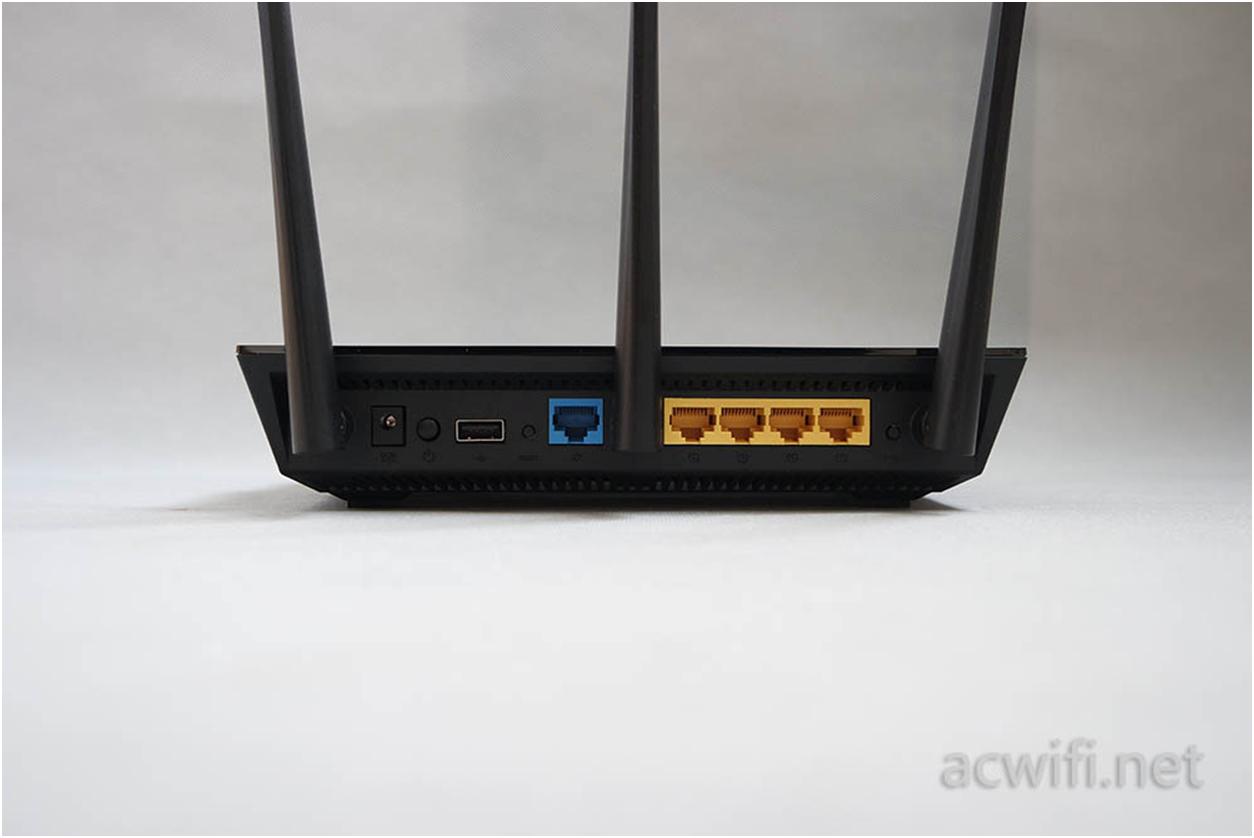 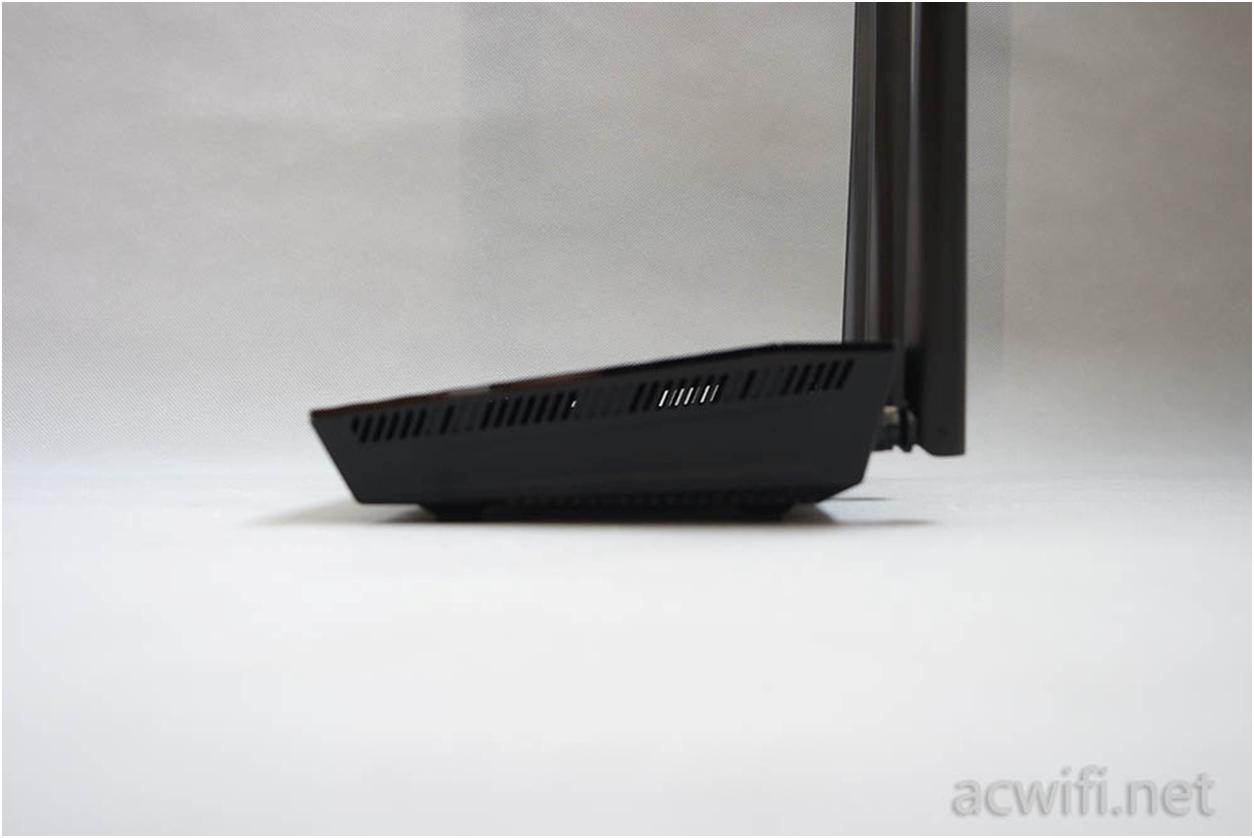 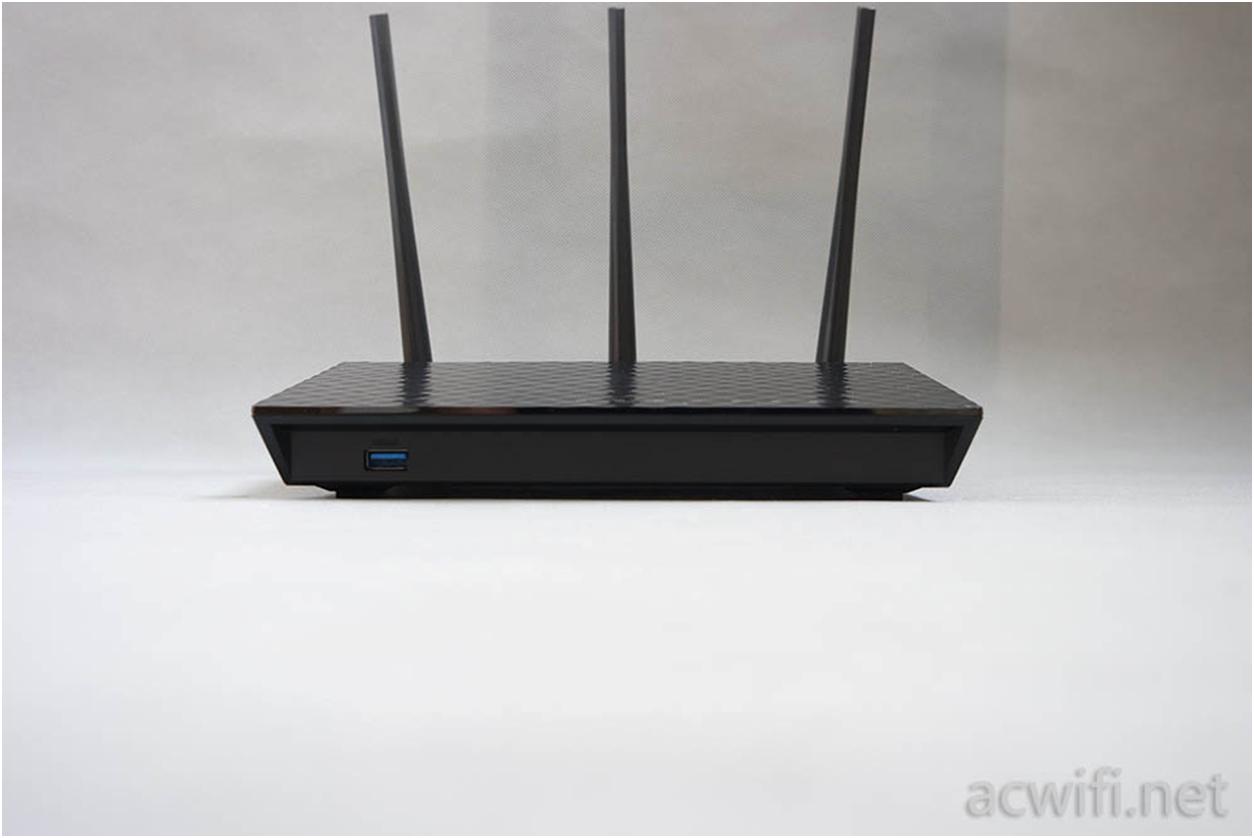 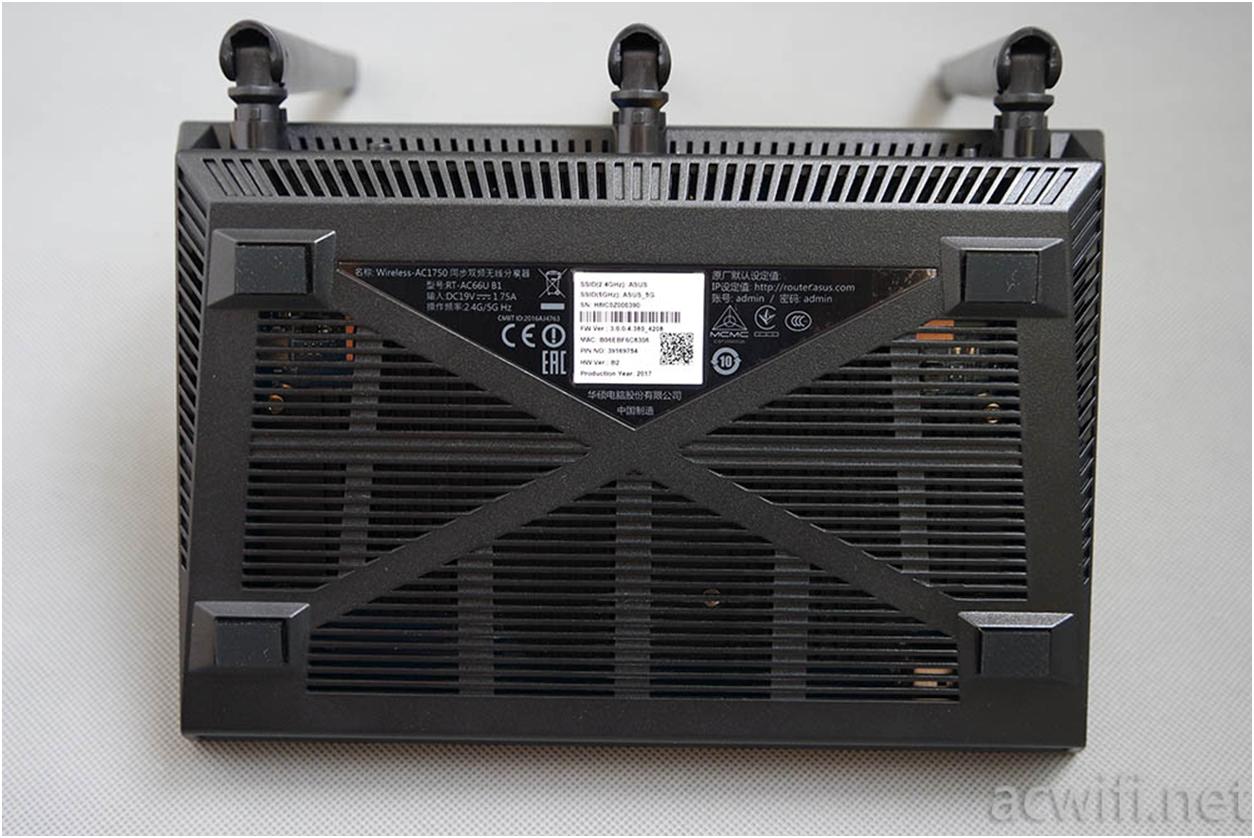 AC66U B1’s outer box is relatively small, really small, it can also be called compact packaging, 3 non-removable antennas are put away, not too much place, the power supply is also small, but the power is not small, the maximum rated output power is 33W, 19V/1.75A, ASUS AC1900P is also such a power supply. The golden “ASUS” logo, USB3.0 in the front of the fuselage, USB2.0 behind the fuselage. If the antenna is removed, it is very similar to the RT-AC1200GU and ACRH17.

Test if the following table: 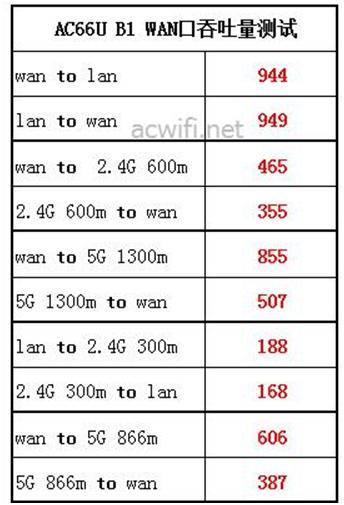 These mid- to high-end routers, NAT performance will not be much different, the throughput will be close to the gigabit rate, but will not exceed 950m.

The wan port is 944m downstream and 949m upstream, which can fully meet the 1G broadband usage.

Wan to 5G 1300m, that is, the computer PCE-AC88 wireless network card is connected to the AC66U B1’s 5G wifi, the wireless speed is 1300m, and the measured downlink data throughput of the WAN port is 855m, which is quite high. 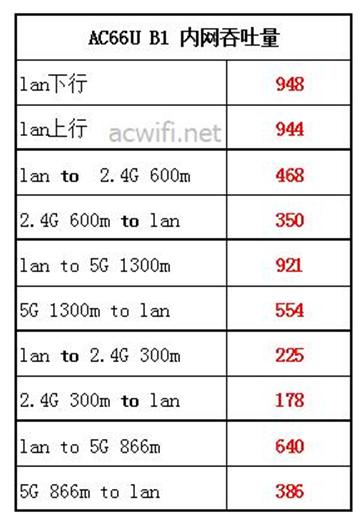 The transmission speed between lan and lan is already the limit of Gigabit NIC. Lan to 5G 1300m can reach 921m, this is a terrible number, it is only 3x3mimo, not 4x4mimo like Fibonacci K3 or R8500. If these numbers are not well understood, use the speed of file transfer to reflect the wireless pleasure. The file copy between the two computers, using the software fasycopy, can easily see the average file transfer speed.

The transmission speed of the 5G intranet is as follows:

The transmission speed of 2.4G intranet is as follows:

Here you can see the 2.4G connection rate of 600Mbps, this AC66U B1 is the original firmware, about the 600M rate, has been described at the beginning, its hardware version is B2.

(Double-band concurrent test, that is, a computer connected to the LAN port, and simultaneously send data to two computers connected to 2.4G and 5G)

Here, the power of the AC66U B1 in each state is tested. As shown below: 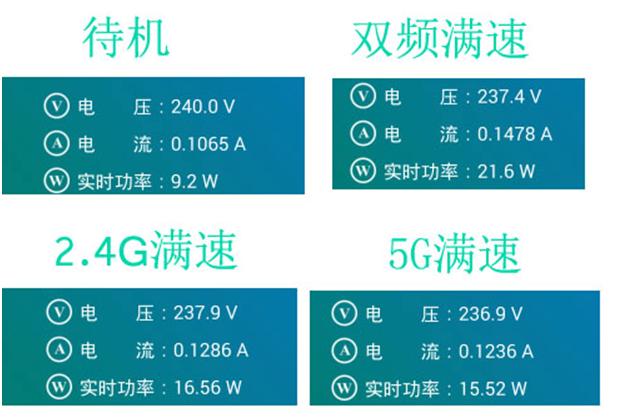 There are also more than 9W in standby, normal, for routers that use Broadcom chips. At the full beam of 2.4G and 5G, it reached about 16W. If both 2.4G and 5G work at full speed, it will reach 21W. This is the maximum power value of the router that is not connected to the USB device. If used daily, the power value is about 10 watts.

I don’t have a 3x3mimo or more wireless network card other than the Broadcom chip, so I don’t know how the wireless transmission speed of other wireless network cards and AC66U B1 will be. I bought dlin’s dwa-192 and USB3.0 interface before. The test of K3 and NETGEAR R7000 will never exceed 80MB/s. The wireless transmission speed is really related to the performance of the receiving device. You can’t just look at the wireless performance of the router.

The method of testing USB read and speed is very simple, that is, using the file copy and paste operation of the windows system itself, using the stopwatch to record the number of seconds used, the file size is divided by the time to get the speed, the result I rounded, I hope to test The USB read and write speed of the route is standard. Just like the speed of the previous WAN and LAN, the speed is tested by different connection methods, so that the tested data can be compared horizontally. I also tried to keep the equipment tested.

Merlin firmware has this option: “Reducing USB 3.0 interference”, the feeling is that if you do not turn this option off, the device plugged into the USB3.0 connector can only have USB2.0 speed. The test is naturally divided into two parts, one is to directly test the read and write speed of the USB2.0 port, the other is to turn off this function, and then test the USB3.0 speed. The results are as follows: 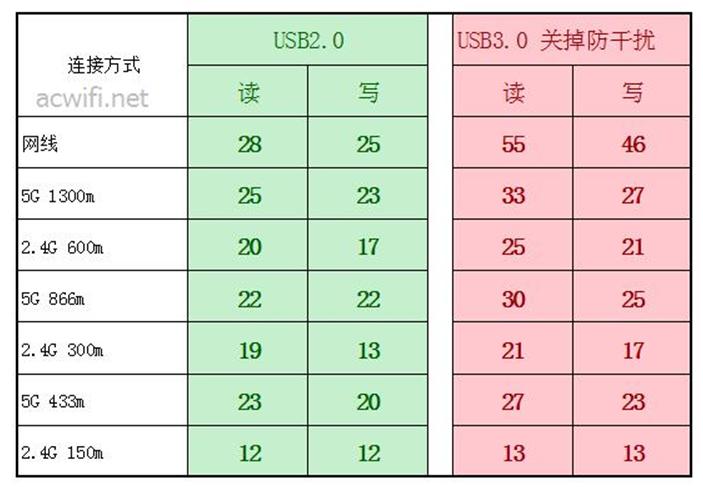 It’s almost 60MB/sec, which is much better than the ACRH17. ASUS RT-ACRH17 Wireless Router Reviews

Wireless 5G read and write USB speed, even with 1300m network card or 866m and 433m, the speed is almost the same, obviously lower than the network card transmission, USB read and write operation is very CPU resources, I have tested the wireless read and write The best performance is the ASUS AC86U, the CPU is BCM4906, dual-core 1.8G, powerful enough, the price is not up to a thousand, the pursuit of USB speed can consider it. New ASUS router RT-AC86U evaluation

The AC66U B1 has faster USB read/write speed than the NETGEAR R6400.

For this test, I took the NETGEAR R7000 for comparison. Below is the regional setting of the AC66U B1 (in the Wireless Settings – Professional Settings), and the united states are selected. (There will be many friends who use this area of ​​Australia, depending on their needs.)

The R7000 I used was brushed by Merlin 7.4, and the regional settings are as follows:

AC66U B1 I didn’t change the version of Merlin, so I won’t check its wireless power value.

This value is not strong.

The plan of the test environment is as follows:

Both routers are placed in the “WIFI” position, and the wireless strength of the four locations is tested using the wireless network card PCE-AC88. The signal strength is recorded for 3 minutes. (Do you want to see this floor plan?) 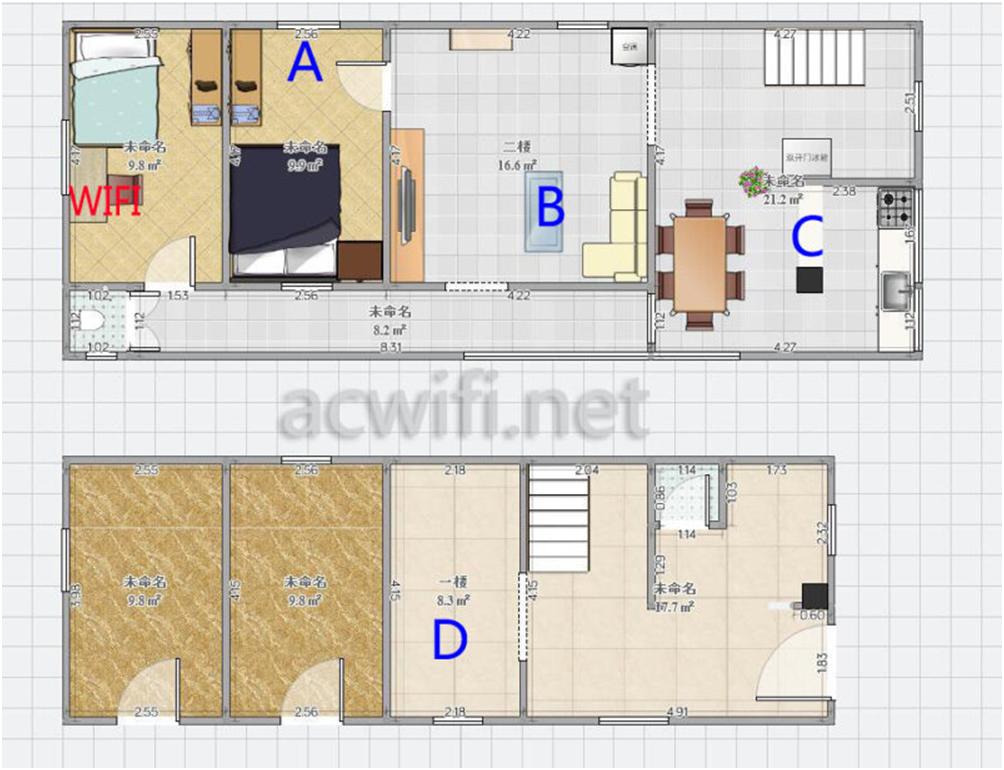 A point signal, the two are very close, 5G is AC66U B1 slightly better, the difference is not obvious

At point D, the 2.4G signal is significantly stronger than the R7000, and the 5G difference is not large.

The results are summarized in the following table: 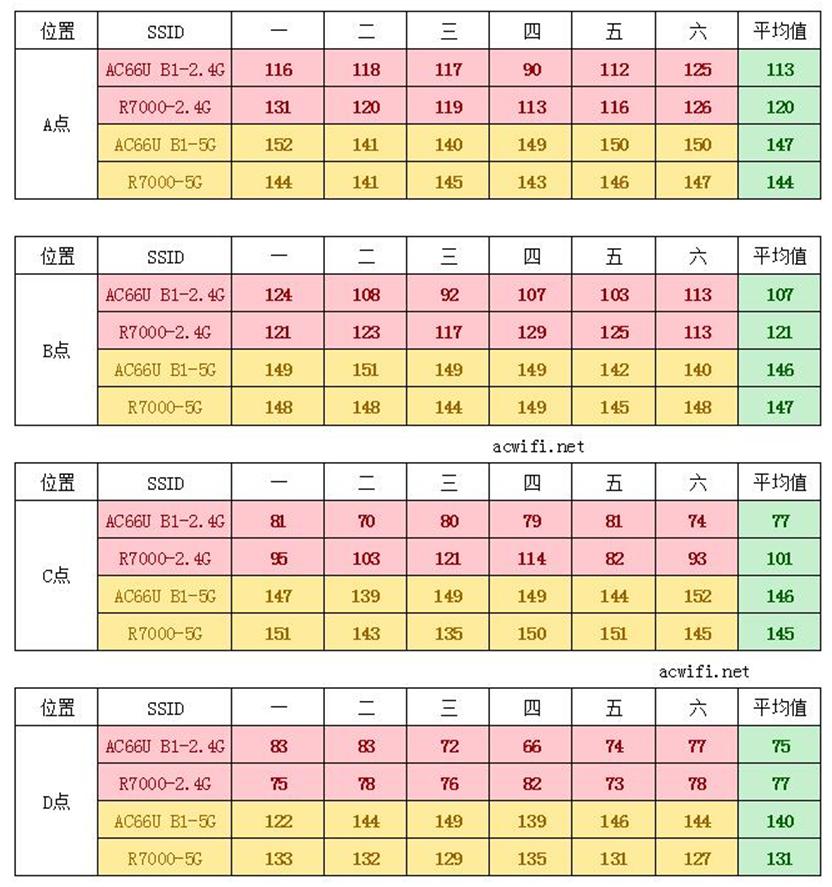 Take the average and get the 2.4G network speed: 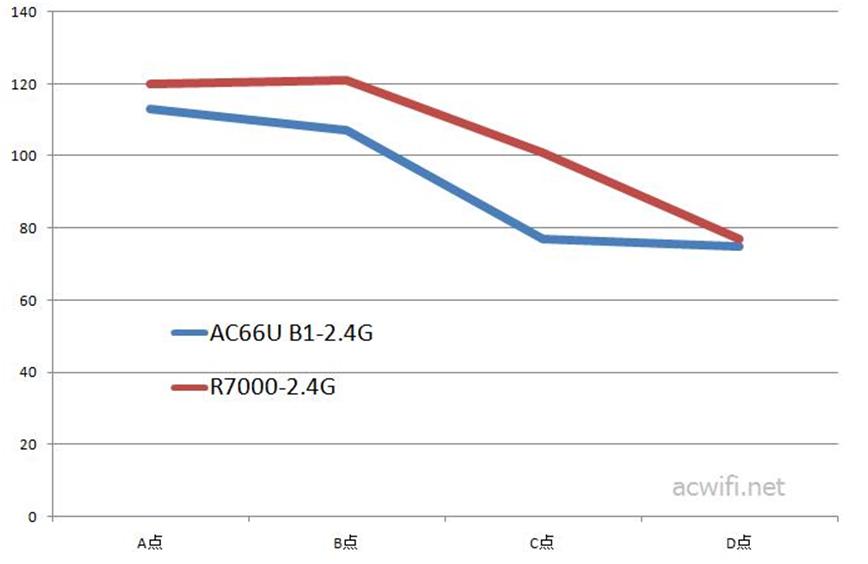 2.4G network speed, except for the speed of the D point in the downstairs, the R7000 is faster in the three positions A, B and C, and the position of the C point is different.

The 5G network speed is compared as follows: 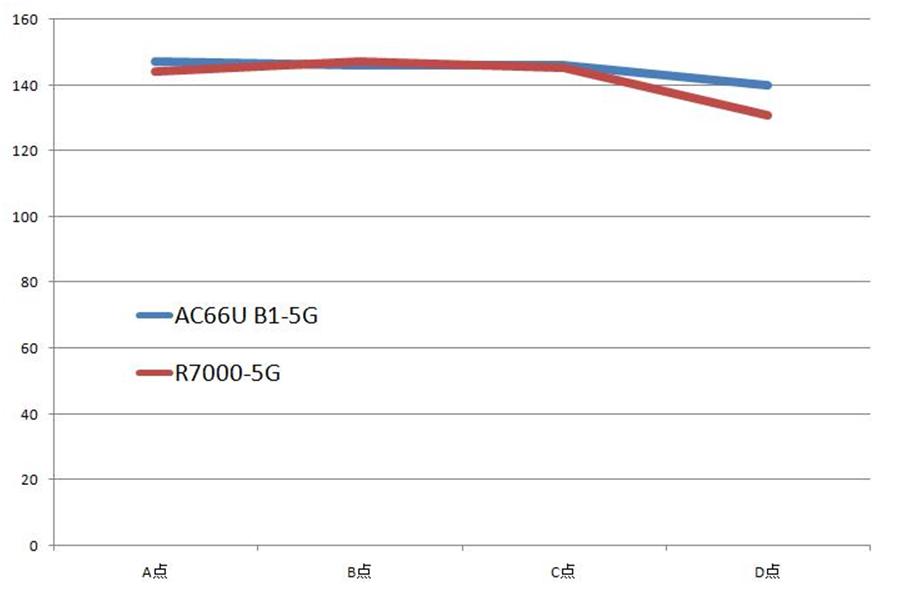 5G network speed, three positions on the same floor can be said to be very close, at the point D, the 5G network speed is AC66U B1 is faster, less than 10%.

The tested wireless network card is still PCE-AC88, and the transmission result is also compared with R7000. (This test of AC66U B1 is also quite time consuming)

The results are listed, including the wireless connection rate and transmission speed, which is also the average speed, not the maximum or minimum. Unit: MB / sec 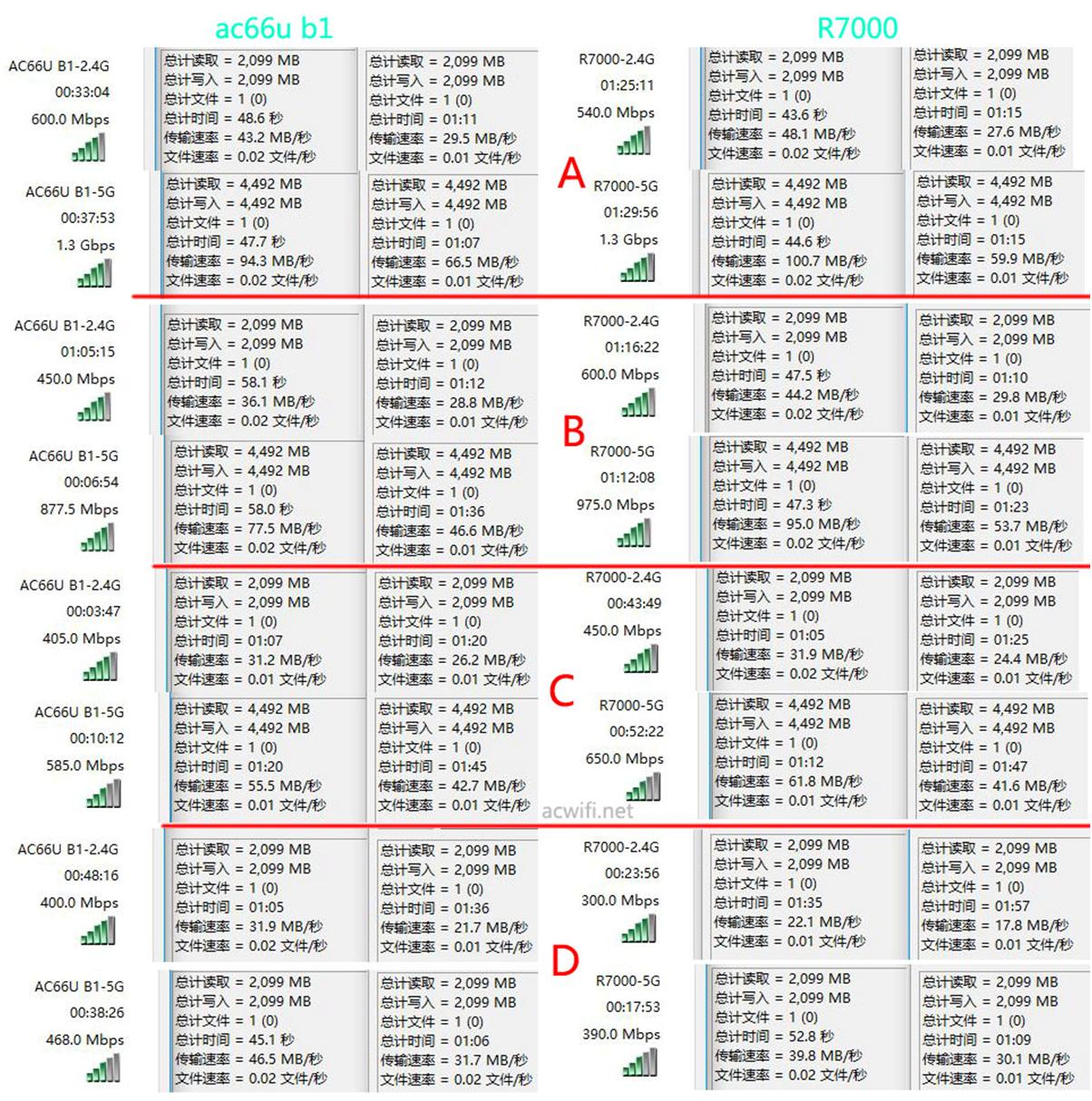 2.4G speed and 5G speed. I extracted the comparison separately: 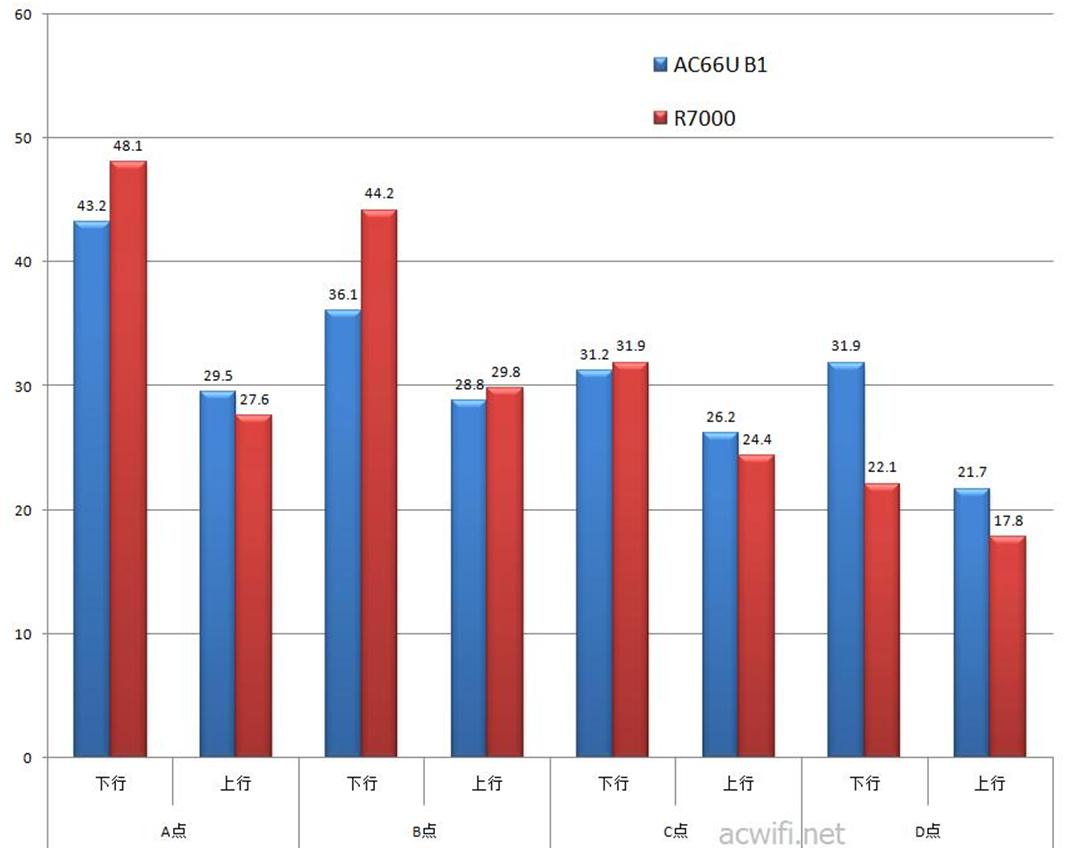 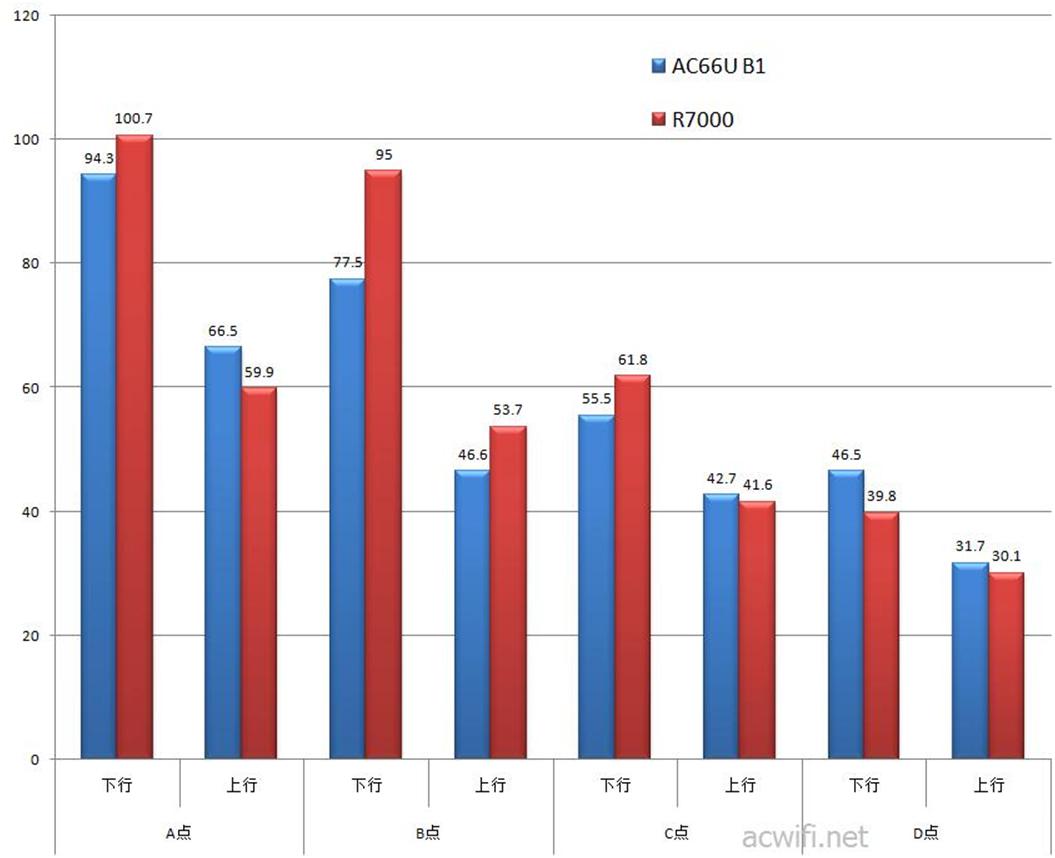 5G speed, also in the close position of A and B, R7000 is very fast, especially the B point position, in the downstairs, 5G speed is less than AC66U B1, it is likely that the wireless power is bigger than R7000.

ASUS AC66U B1, as a price of more than 500 yuan, cost-effective, eliminating some of the circuit components, in exchange for an affordable price. If you use instability, instability will be exchanged. Why don’t you buy something on Jingdong? Brushed version of Merlin firmware can use koolproxy to advertise, is it more practical? The function is good, the wireless performance is better, the USB speed is practical, that is, the power is bigger and the heat is bigger. There are also three years warranty!

I want to take AC68U for comparison test, but I feel that the new ASUS AC1900P is more cost-effective. The next one will evaluate AC1900P.