This test is one of the most time-consuming and energy-intensive ones. It took nearly a month, resulting in less time for replying messages and public accounts, and the article update was interrupted. It can’t do other evaluation mentality when it is done. In the test process, several wireless network cards have also been purchased. With the increase of wireless network cards, different combinations of receiving devices are also available. There are three types of routers tested: NETGEAR R7800 (QCA9984), NETGEAR R6800 (MT7615N), ASUS AC86U (BCM4366E), and all three wireless routers support MU-MIMO technology, which are also 4x4mimo products, which represent Qualcomm and MTK respectively. , BCM chip. 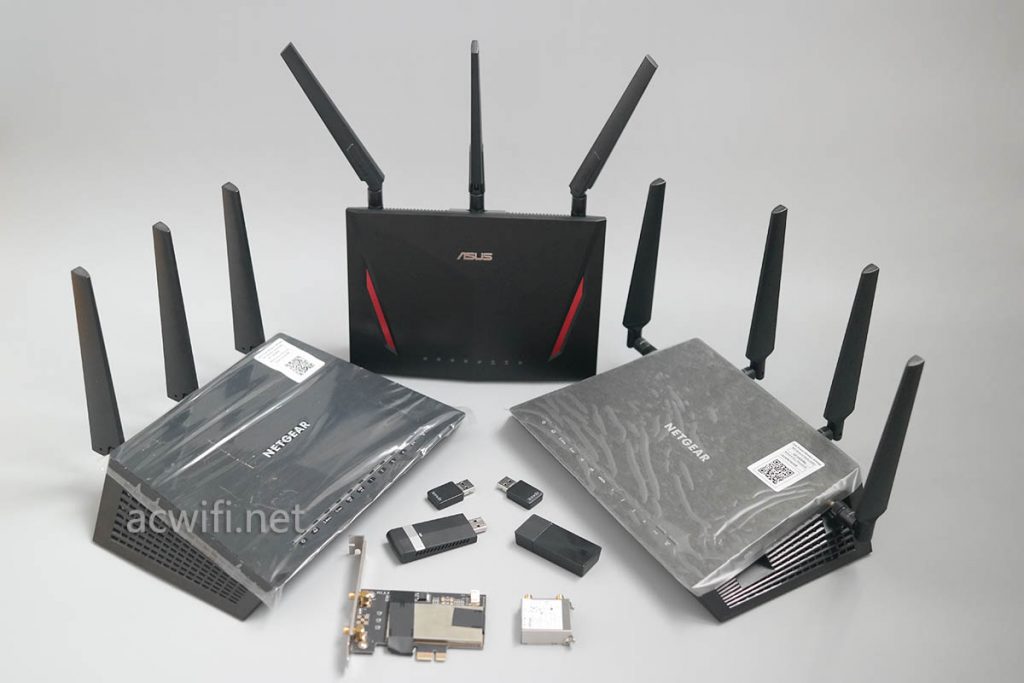 I believe that the biggest concern for MU-MIMO is “how compatible between different brands!” Therefore, the purpose of this test is born, and the focus is on compatibility, so there are many kinds of receiving combinations. But I can’t include all the equipment combinations you want to know, because I have limited receiving equipment supporting Mu-MIMO, there is no Broadcom chip mobile phone and network card, and there is no MTK, which is also a pity.

(Why don’t you tear off the film on the router? Because I want to sell a good price when I use it later! Is there something worth the film?) 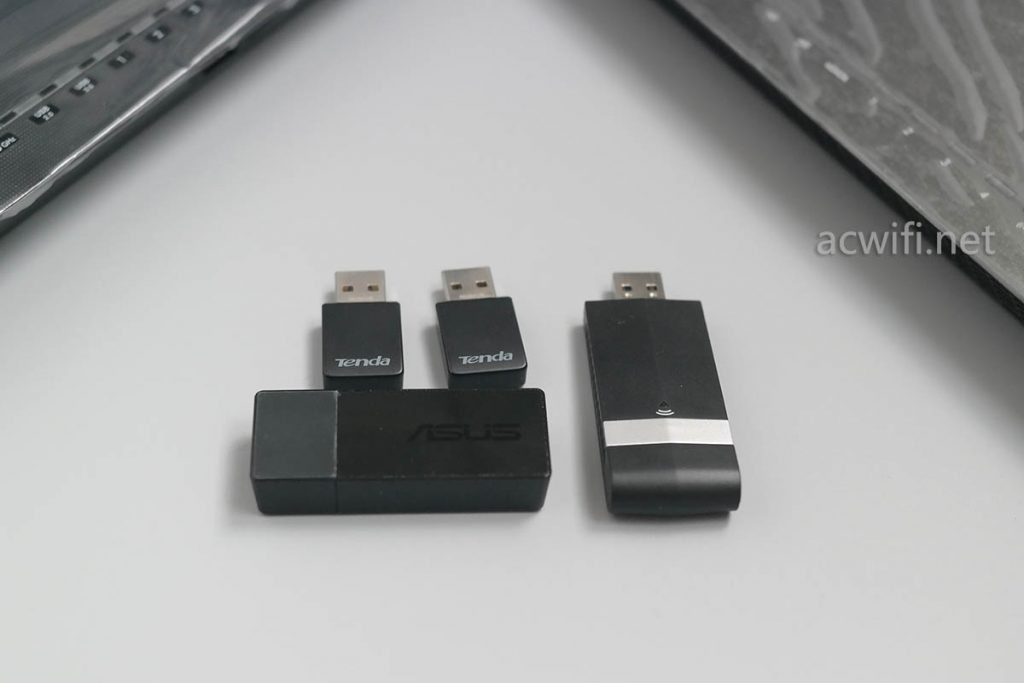 I first bought U9 to test the MU-MIMO situation of the wireless routers of those crab chips. The result is unsupported “Realtek MU-MIMO with Tenda U9 wireless network card.” Then I found a cheap RTL8812BU network card, I am not going to buy the ASUS AC57, but because I want to know the combination of two RTL8812BU network cards, and do not want to buy Ogilvy again, I bought the ASUS AC57 back. It is because of the subsequent purchase of these two USB wireless network cards, which brought me a lot of trouble and time.

Three QCA9377 (1x1mimo), bare card is very cheap, less than 30 yuan, I have installed the adapter card to the desktop.

These have been there before, the test process has purchased two intel9260 network cards, one is a separate bare card ), one is assembled by others 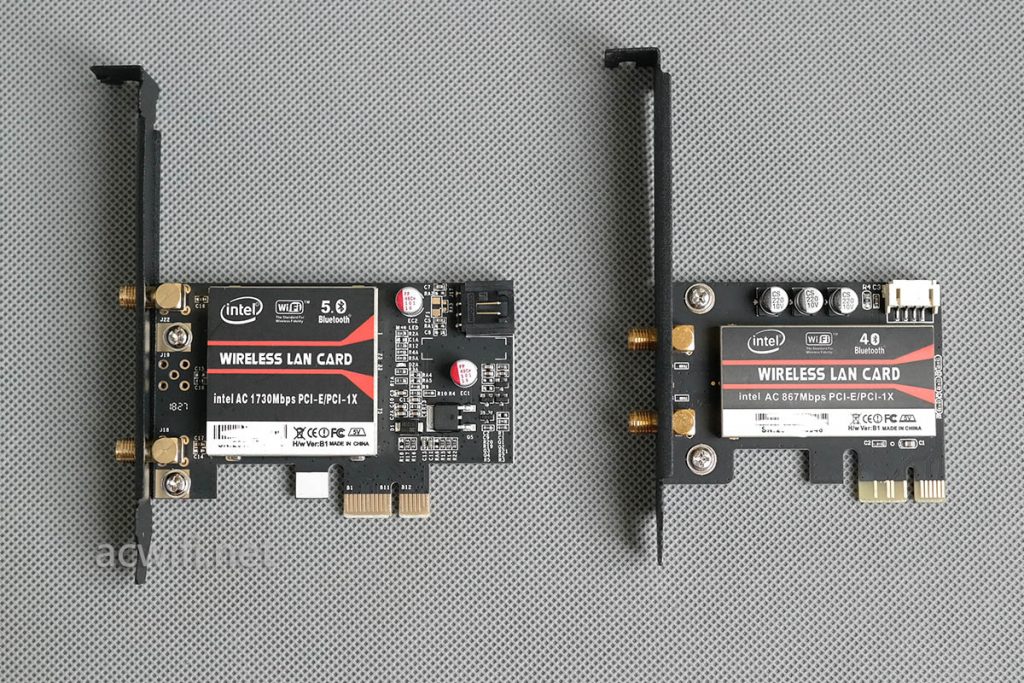 Because my dell book has redundant PCIE slot, you can install more than one wireless network card, but the interface is only mini pcie instead of intel9260 ngff interface, so I purchased the adapter card, it can be installed directly, because the antenna interface The mismatch, I bought a short antenna directly, and later bought the adapter cable, not installed, because of the close-range test, actually passed the R7800 160M bandwidth run throughput test, the result scared me, and later said its “BT” . 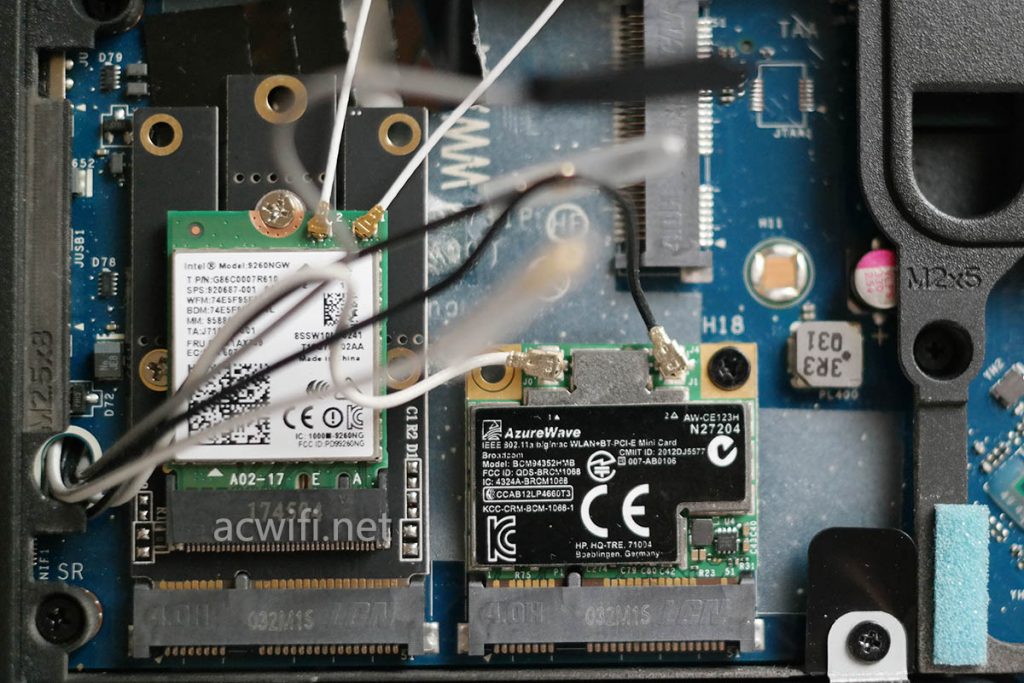 But mu-mimo is not a router with one antenna and one device, and three antennas are transmitted with three devices at the same time. Instead, beamforming technology is used to simultaneously emit different wireless beams. The receiving device supporting mu-mimo will only receive its own beam (currently 802.11ac wave 2 only supports 5G downlink). As shown below:

A bit abstract? Then I copied the files to one computer at the same time through two computers to see how much difference between SU-MIMO and MU-MIMO. The wireless network cards of computer A and computer B are both QCA9377, and the router NETGEAR R7800 is connected to the computer C through the network cable, and simultaneously copies a single file with a size of 2G. The measured data is as follows: 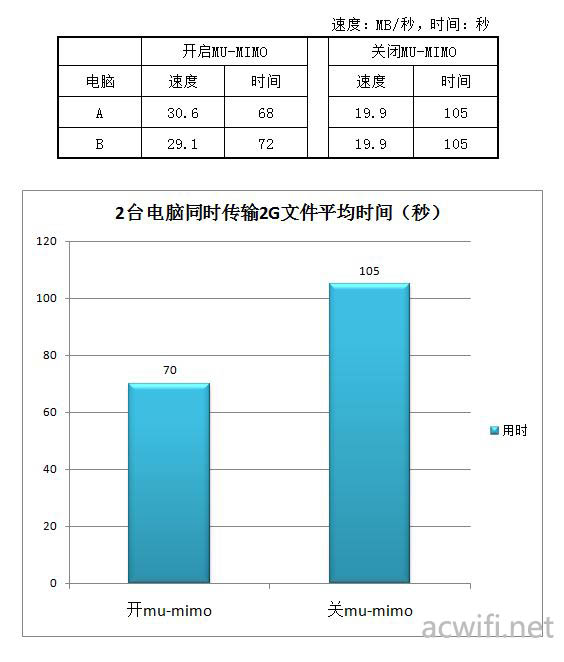 The average transmission time of two computers, mu-mimo is half faster than su-mimo.

Now carry out various combinations of actual measurements, the software uses IxChariot, the script uses Throughput.scr, a computer connects to the router with a network cable, and uses the LAN to WLAN form to test the throughput of the router 5G downlink. Each test time is 1 minute, each time. The results were tested multiple times in succession and taken to their maximum value. When each router is tested, other routers are powered off. All routers, computers, and mobile phones are tested in the same room.

R7800, R6800, AC86U, the wireless settings of the three routers, the region is set to the United States, the wireless channel is the same. There are MU-MIMO switches in the wireless options. In order to ensure the settings are effective, the router will be restarted each time the MU-MIMO is turned on or off. Turning off the MU-MIMO option is equivalent to SU-MIMO, and turning on is MU-MIMO. The following picture is one of the test results: 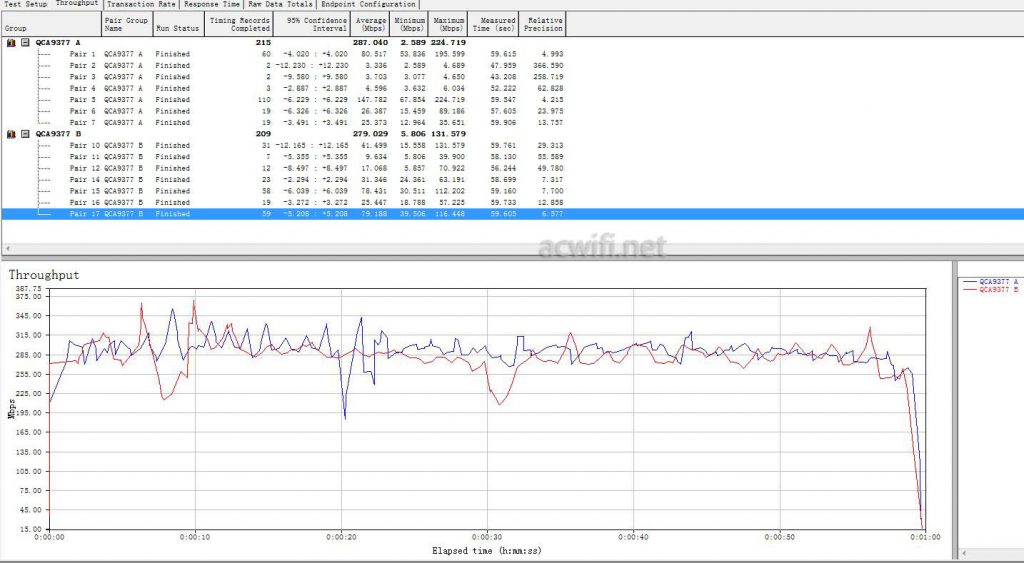 In the above figure, the sum of the throughput rates of “QCA9377 A” and “QCA937 B” is the total throughput of the wireless router. That is 287+279=566m. I put all the test data in the table, a bit messy, interested can look at it, and look at the summary chart without interest. (The form is too long, I divide it into 2 pictures) 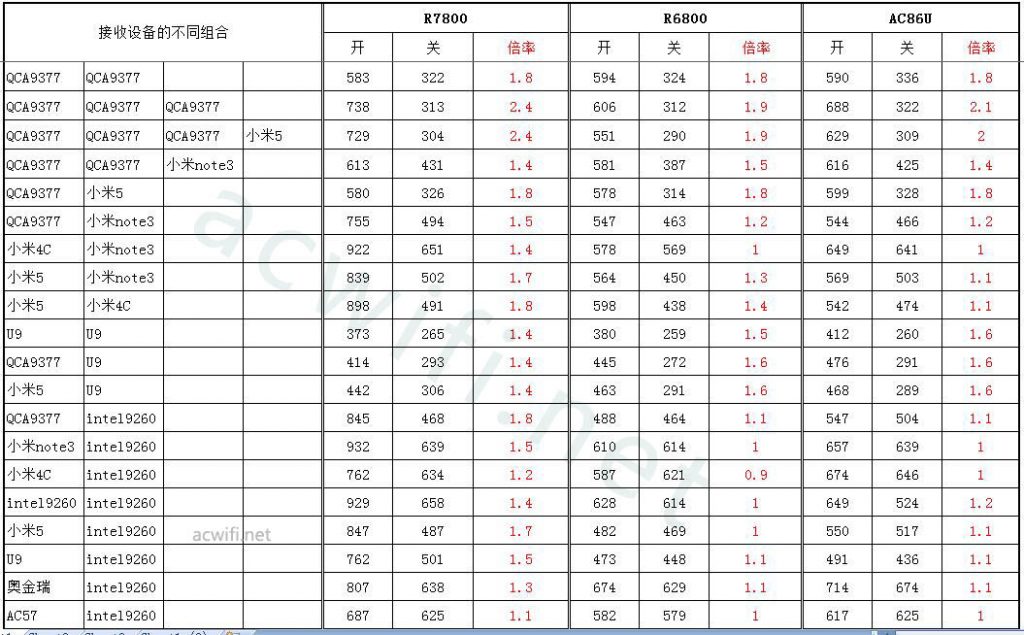 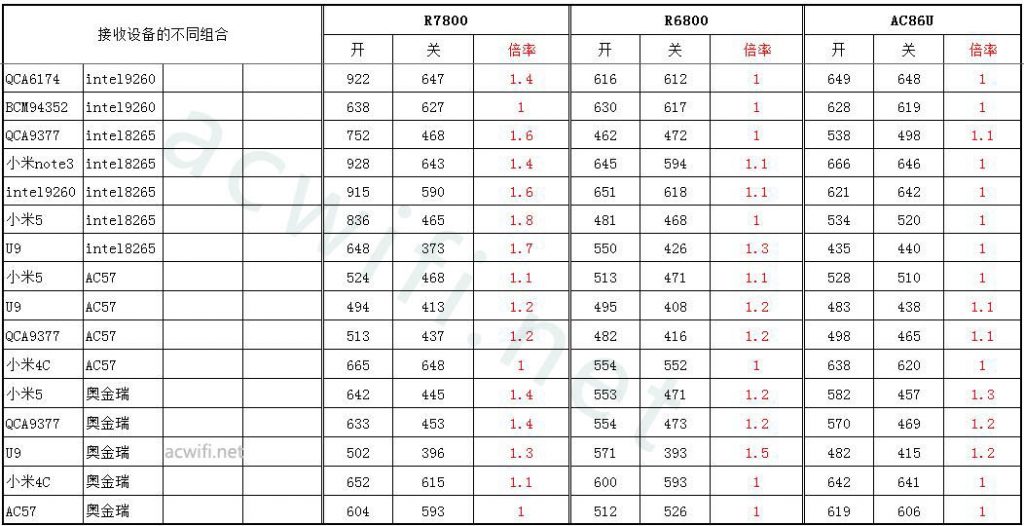 Mainly look at the “magnification” value in the table, it is the ratio of opening mu-mimo and closing mu-mimo. I personally think that this ratio is greater than or equal to 1.3 times to support MU-MIMO.

The following is a summary of the classification. (I said 1x1mimo device, which means the connection rate is 433m, and 2x2mimo is 867m)

First, the use of Qualcomm chips receiving equipment effects: 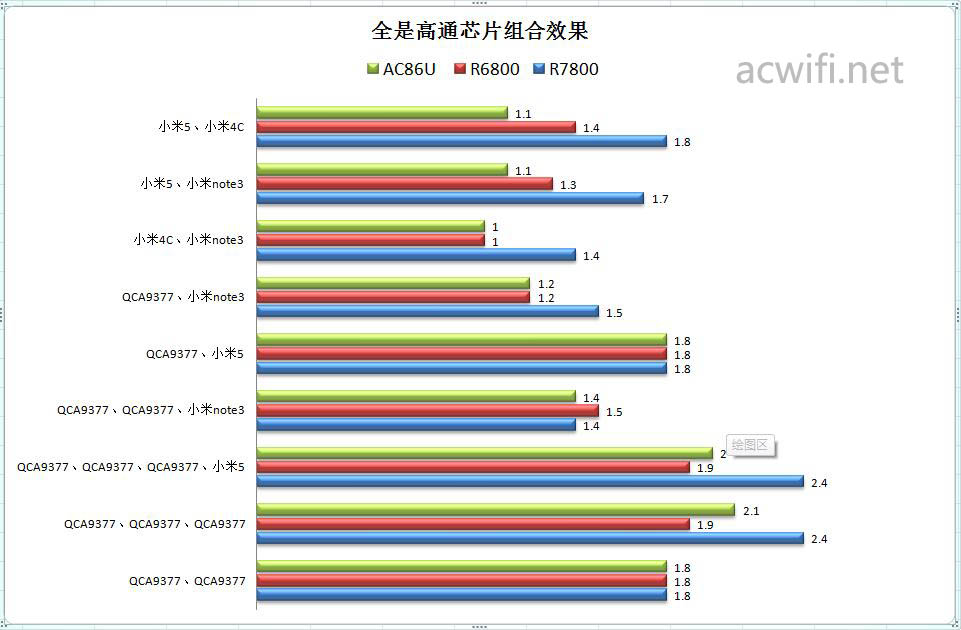 I have been obsessed with the MTK of the R6800 before being compatible with Qualcomm chips, so I have been looking for MTK’s MU-MIMO receiving device. This test surprised me. The NETGEAR R6800 can get along with the QCA9377. The ASUS AC86U is also Whether it’s two 1x1mimo devices, or three 1x1mimo or even four 1x1mimo devices, all three wireless routers support it. Only on the support of four 1x1mimo devices, the R7800 is significantly better, possibly the addition problem between Qualcomm and Qualcomm. In the combination of Xiaomi 4C + Xiaomi note3, that is, 2 2x2mimo devices, only R7800 support, the other 2 models do not support, that is, MTK and BCM are not compatible with Qualcomm’s 2 mimo devices. But this does not mean that two 2x2mimo devices are not supported, as I will talk about later.

Second, all the effects of the realtek chip:

Tenda U9 is a USB2.0 interface, its maximum throughput is about 260m, if it is transmitted with 2x2mimo equipment, it will seriously delay the leg. Two U9s and three routers support MU-MIMO, so Tenda U9 really supports MU-MIMO. It can be seen from the test of U9+ Aojinrui that the NIC is also supporting MU-MIMO, and the ASUS AC57 is not very good. AC57 and Agilent are both RTL8812BU chips. I installed the drivers downloaded from their official websites to install them. However, each time the computer is rebooted, it needs to be installed once to run in USB3.0 mode, so these 2 NICs Brought a lot of trouble for me.

To solve this problem, it is necessary to install other network card drivers with the same brand model, and it can automatically determine whether to operate in USB3.0 mode every time. This driver is: “EW-7822UTC_Windows_Driver_1.0.0.6”, Edimax out of the wireless network card. After installation, it is really a problem to solve the problem that you can’t run USB3.0 after rebooting and need to reinstall the driver. However, in order to be fair, I deleted it and installed the driver provided by the official.

Third, all the effects of Intel chips:

Out 05 because intel8265 and intel9260 are 2x2mimo specifications, so the combination is only 2 cases, 8265+9260 and 9260+9260, why not 8265+8265? Good question, I missed this combination. The result is very clear, whether it is intel8265 or 9260, compatibility with the NETGEAR R7800 is very good. Before that, I always thought that the intel mu-mimo parameter was just a display, and it really could be supported. The combination of intel9260 is the most tested by me, because sometimes I can’t believe the data, sometimes I doubt whether I work at 160M bandwidth and conduct a separate test to see if the 700m throughput rate is enough to write the test results on the form. .

Xiaomi 5 and Tenda U9 are both 1x1mimo, the rate is 433m, Xiaomi 5 is Qualcomm chip, U9 is RTL chip, QCA9377 is also 433m speed, Qualcomm chip. Qualcomm and RTL’s 1x1mimo are supported by all three wireless routers, namely RTL 1x1mimo and Qualcomm 1x1mimo are compatible with NETGEAR R6800, NETGEAR R7800 and ASUS AC86U MU-MIMO. Because the speed of U9 and NETGEAR R7800 is slower than the other two, the result is the worst, only 1.4 times. Xiaomi 5, U9 and ASUS AC86U are examples of MU-MIMO compatibility between typical different brands.

Five, the combination of 1x1mimo and 2x2mimo of different chips: 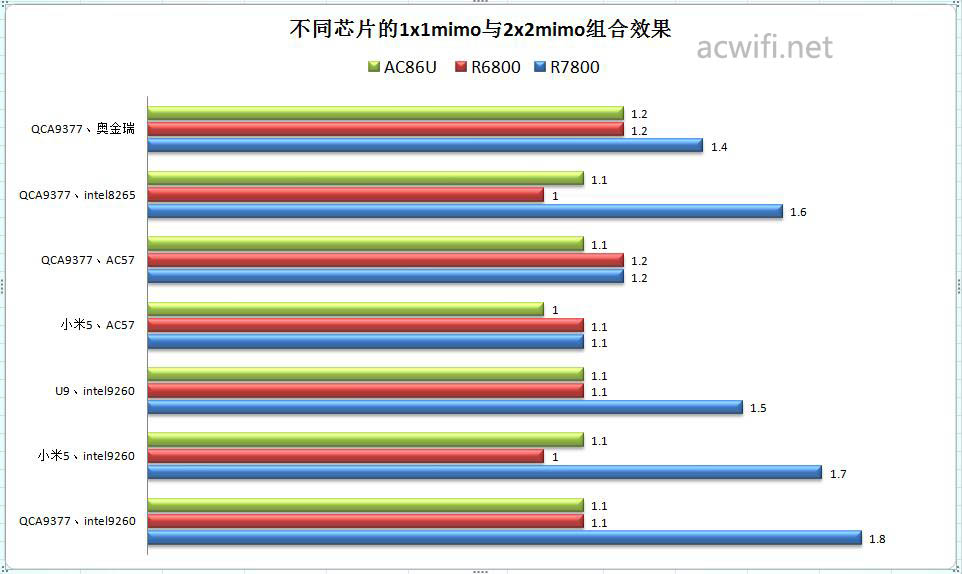 The combination of 433m and 867m, because of the influence of the barrel principle, 1x1mimo will pull the back leg of 2x2mimo, the test result of closing MU-MIMO will be quite different each time, because it depends on how much 1x1mimo accepts the data packet, if 1x1mimo receives Less, then the result will be faster, if it receives much, the whole result will be slow, so it is not accurate to use the magnification to determine whether MU-MIMO is supported. This situation will be understood by looking at the specific values, as shown in the following table:

Can be seen from the above table, all combinations of intel chips, mu-mimo performance data is higher than other, especially the performance of intel9260, very good, Qualcomm and intel combination, compatible with the NETGEAR R7800 Well, compatibility with MTK and Broadcom is not so good. 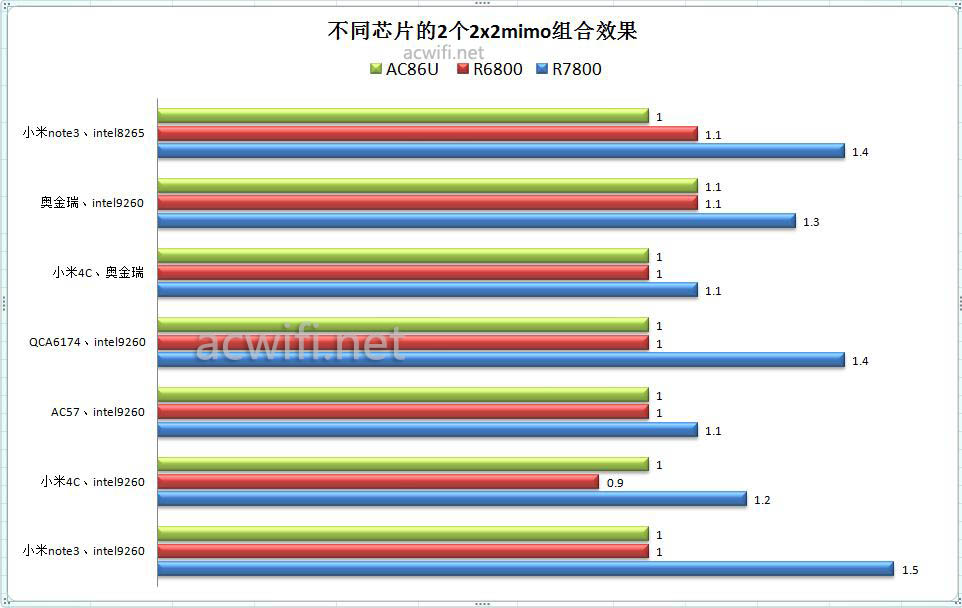 In the above two 2x2mio device combinations, only the NETGEAR R7800 is compatible, whether it is Qualcomm and Intel, or RTL and Intel, and is compatible with MU-MIMO. The combination of Xiaomi note3 and intel9260 has a total throughput of more than 930 m, which has reached the bottleneck of Gigabit wired network card. But not every time I can achieve such a throughput rate, but most of them are over 880m, and one is slower. It is because when I first started transmitting, I still have not run under MU-MIMO. After the transmission, I will go all the way up, as follows. Figure:

The total throughput rate exceeded 500m from the initial 500m and after more than 20 seconds of transmission. Regardless of the combination, the intel9260 is very compatible with the NETGEAR R7800. (All the above tests, the NETGEAR R7800 did not choose the HT160 bandwidth).

In the previous MU-MIMO test using Tenda U9 and Tenda AC10, I learned that it is not supported. I think that the 2x2mimo router cannot support MU-MIMO. This time I bought Tenda MW6 and LINKSYS VELOP because I want to test MESH. The frequency version, so continue to test this time. I really want to know the answer. It is known from the disassembly of MW6 that the chip hardware is the same as AC10. Tenda AC10 disassemble, one machine to complete. It is also said to support MU-MIMO. VELOP I learned from the disassemble in other places that the chip is IPQ4018 (Qualcomm quad-core, frequency 710MHz), this chip integrates 2.4G and 5G at the same time, and supports MU-MIMO, so I have a little expectation for this. (The VELOP tri-band version of the CPU is IPQ4019, also quad-core, the frequency is similar.) Dual-frequency version of VELOP Jingdong link, Tmall store link

The test results are as follows: 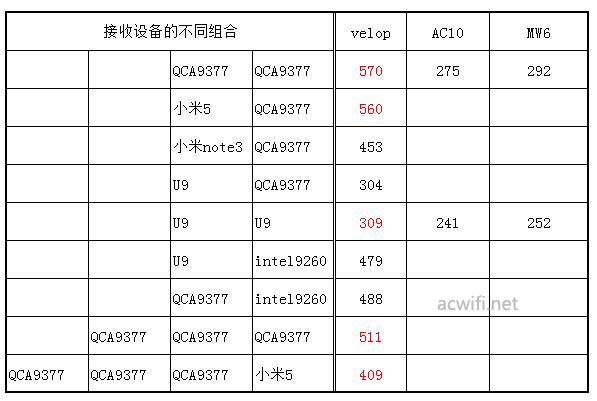 Because QCA9377 and U9 are used to test AC10 and MW6 respectively, MU-MIMO is not supported.