Checked ASUS official website, the definition of ASUS AiMesh is this:

ASUS wireless routers are designed for greater Wi-Fi coverage. In general, an ASUS wireless router provides a smooth, reliable Wi-Fi network for every corner of the home. However, Wi-Fi coverage can be affected by many factors, such as: room configuration, building materials, and even furnishings! If you have a dead end or unstable signal in your home, then ASUS AiMesh is the ideal choice! AiMesh is an innovative wireless router function that connects multiple ASUS wireless routers and creates a home smart Wi-Fi system that replaces proprietary mesh systems to provide users with more powerful and flexible features that are effective and flexible. Solve your Wi-Fi signal problems and there are no restrictions on other brands of multi-router systems: For example, when upgrading, you can mix different models of ASUS wireless routers without having to discard the original wireless router or even use the old ones. Wireless router to extend the AiMesh network! AiMesh allows you to centrally manage all your wireless routers in a time-saving manner, and seamless roaming means you no longer have to switch networks. AiMesh is Wi-Fi you can trust, and all devices can be accessed at any time!

This means that you can use the ASUS routing that is already in use with the newly added ASUS routing or at least 2 ASUS routes to form a smart WIFI system to increase wireless coverage. The effect is to have a master route control all nodes, seamless roaming automatically switch WIFI without the need for traditional manual switching. AI, isn’t that meant by artificial intelligence? The use of artificial intelligence to form the MESH system is AIMESS.

Popularly speaking, it is a fool-like wireless relay and wired relay. No matter what principle or technology, consumers only have to be effective. Most users only need 2 or 3 to meet the signal coverage requirements. This time I used AC86U as the master and AC66U B1 as the node to test the actual effect of AIMESH. The main test is the seamless roaming effect, which costs a lot of money. If you can’t even do this, you can’t say it. 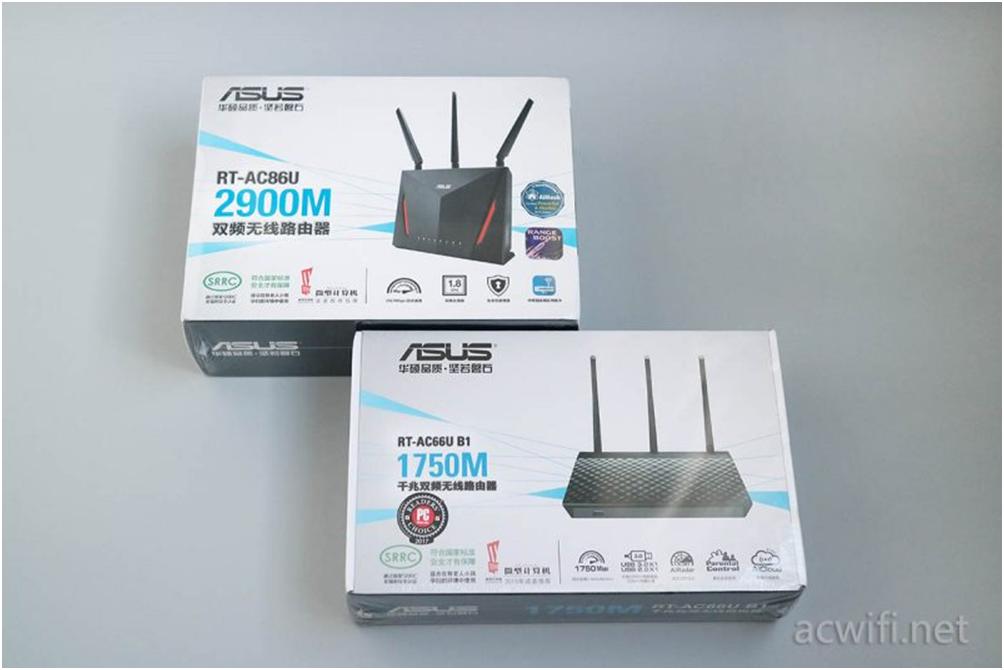 The picture below is the official comparison of ASUS, or the advantage. 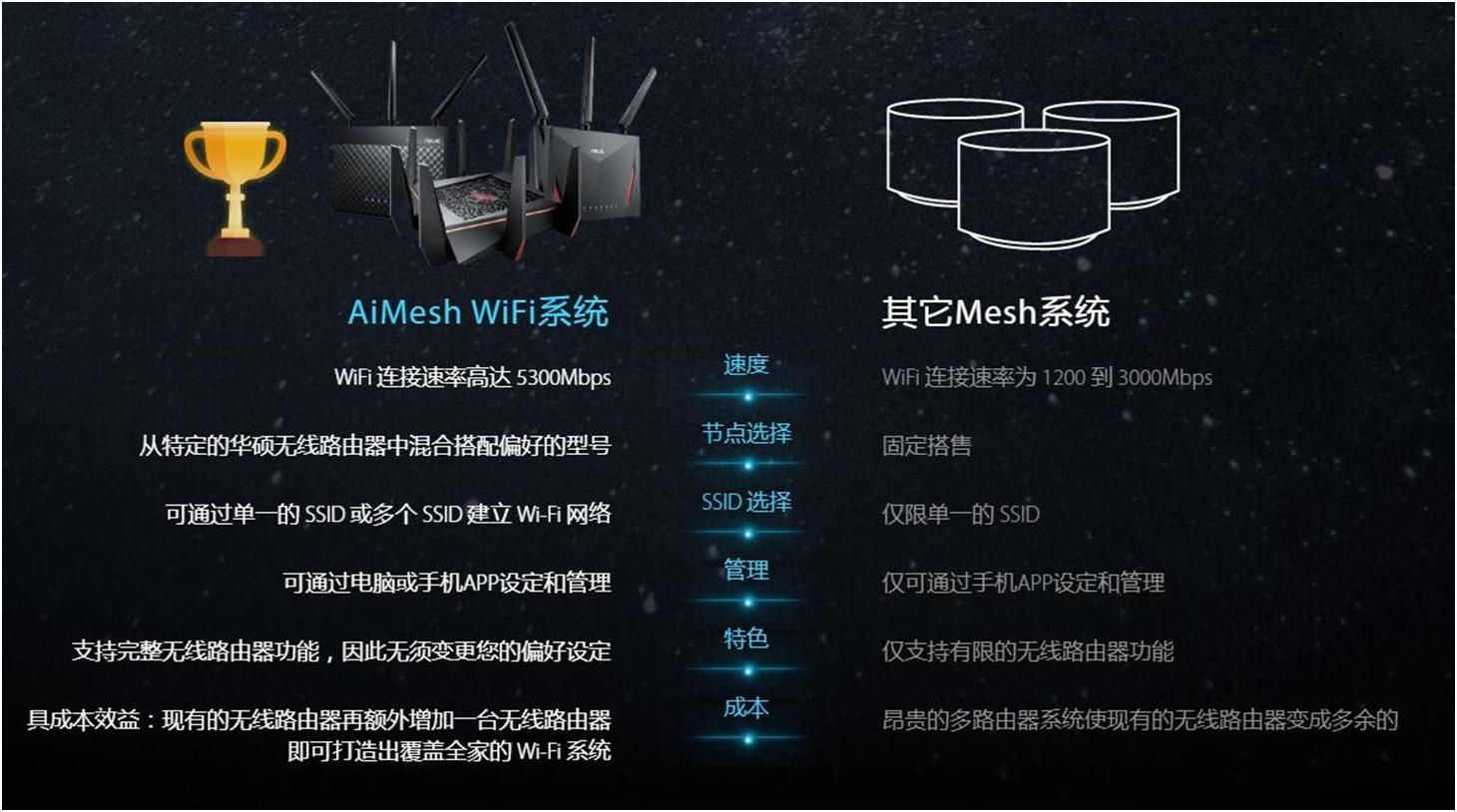 Mix and match the preferred model from a specific ASUS wireless router – also 哟, can be cheap or expensive, or can use dual or triple frequency;

A WI-FI network can be established with a single SSID or multiple SSIDs – as if other MESH products could only be set up with one SSID;

Support for full wireless router functionality, so there is no need to change your preferences – as if others can’t use the original router as the primary route;

First, set the AIMESS process (AC86U as the main route, AC66U B1 as the node)

Both routers were upgraded with firmware before setting AIMESH, the version is 3.0.0.4.384_45149. AC66U B1 as a node, I did not plug in the network cable, the mobile phone connected WIFI into the settings, switch the operating mode in the system management.

The AC66U B1 is an option before updating the firmware: 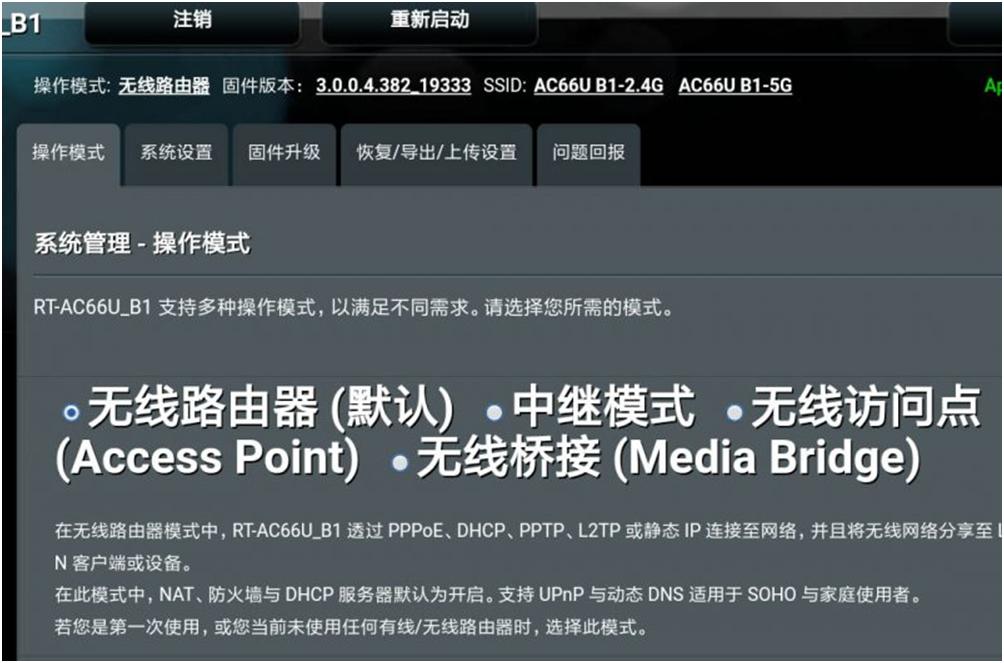 After updating the firmware: 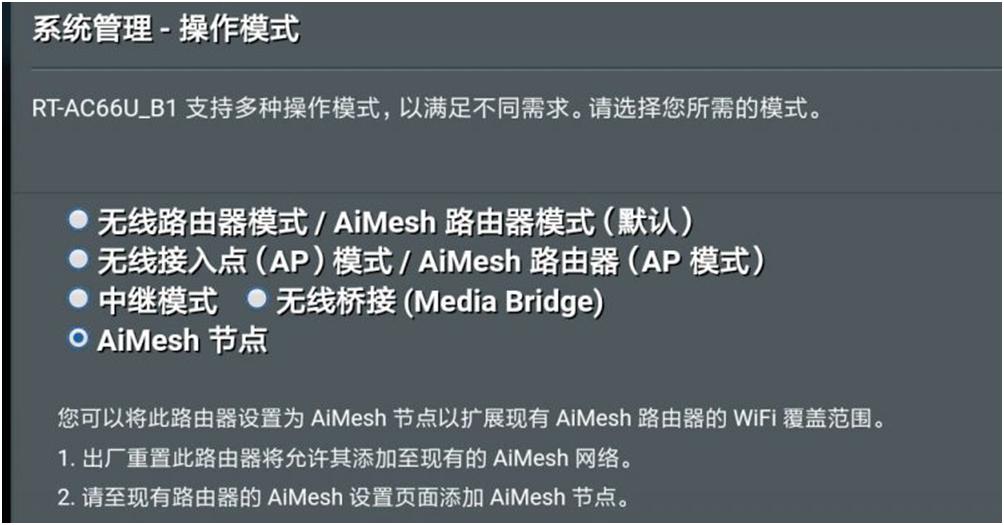 More AIMesh options, here I choose “AiMesh Node” in AC66U B1. Pulling down is shown in the figure below. Clicking Next will reset the AC66U B1 of the node to factory settings. 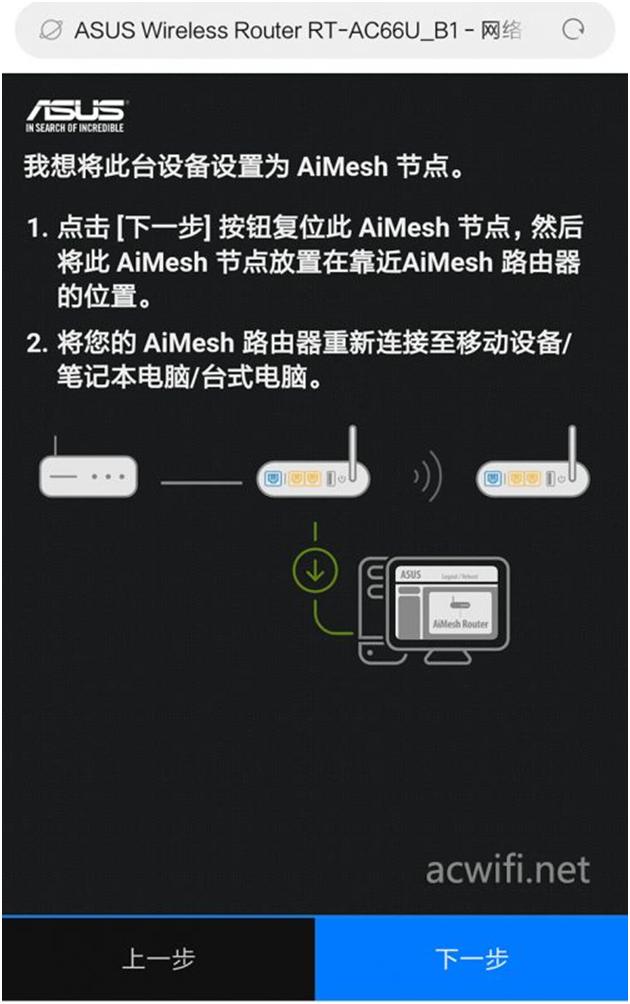 This interface will appear in the end, so there is no need to do anything with the AC66U B1. Of course, you can’t turn off the power. The add node can then be operated on the primary router AC86U. Throughout the process, the AC66U B1 has no network cable. 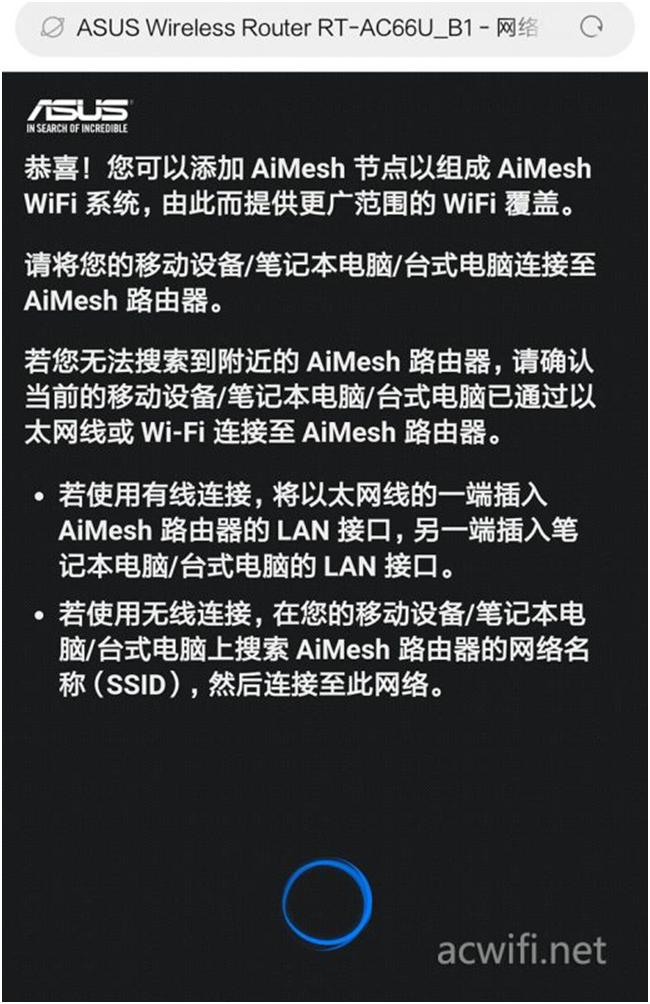 The computer or mobile phone is connected to the main route AC86U. In the “Network Map”, you can see the option “AiMesh Node: 0” in the following figure. Click on the button to add the node. 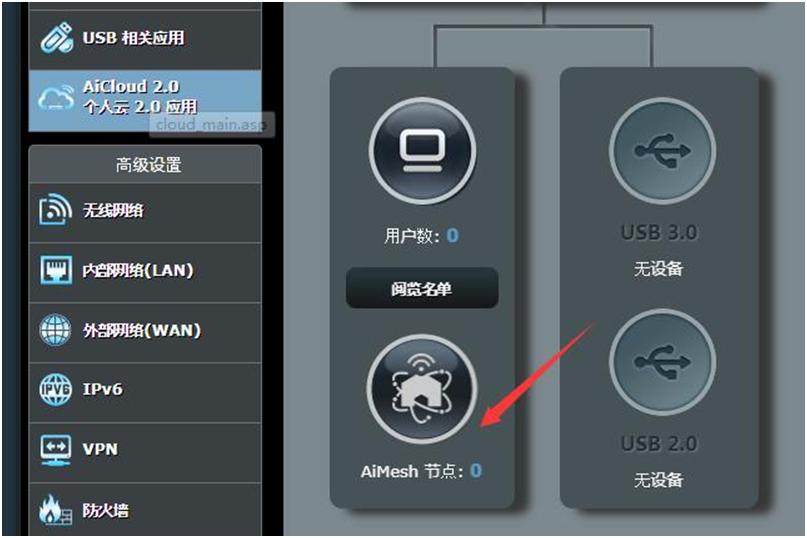 Scanning, adding, the process is simple, not much description. Node settings can be clicked on the “More Settings” in the figure below 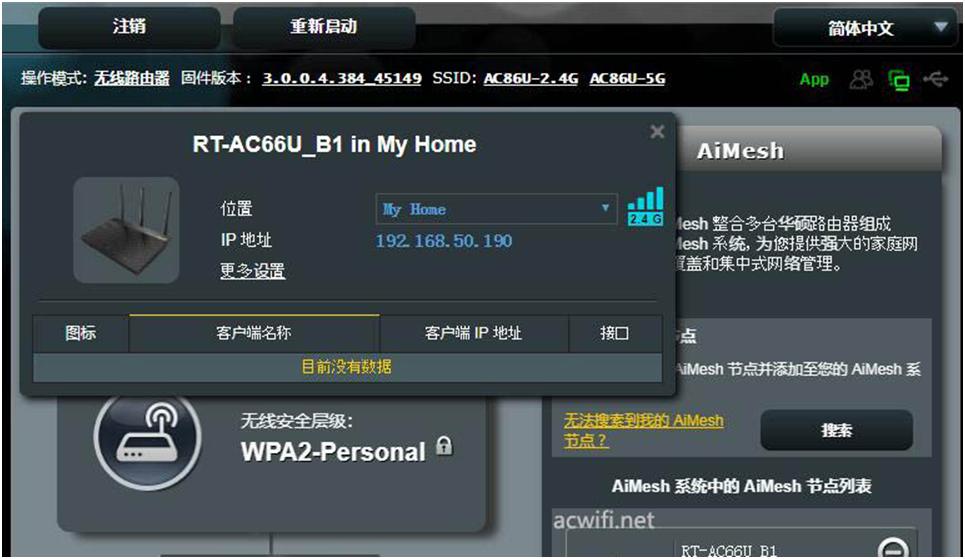 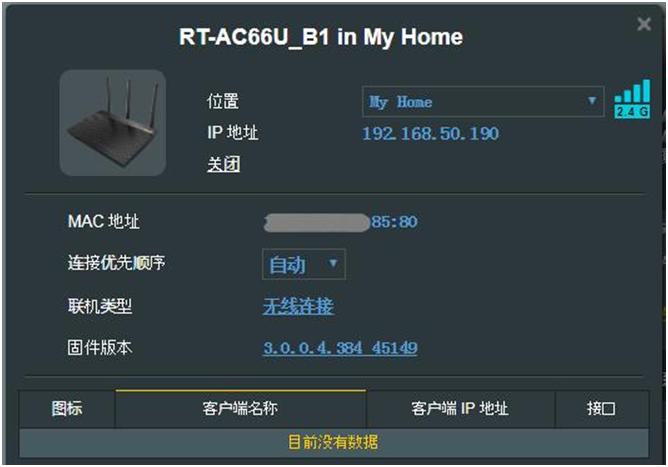 But I don’t understand the 2.4G bridge used instead of 5G (regardless of whether I am near or downstairs), as shown in the upper right corner of the picture above.

If you want to connect the node with a network cable, plug in the WAN port of the AC66U B1. There are instructions as follows: 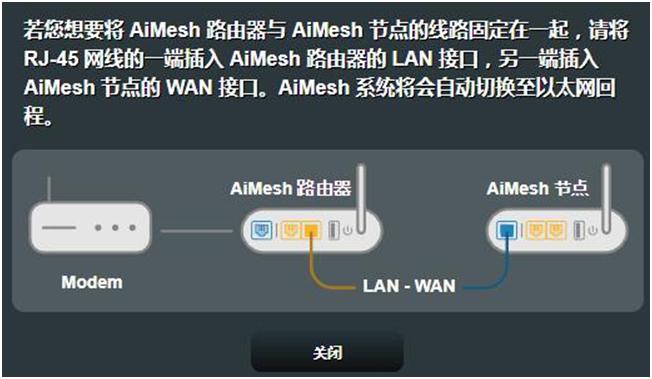 It is equivalent to saving one LAN port. After all is properly, the WIFI name of the AiMesh node will be the same as that of the main router. If 2.4G and 5G are separated, they are also separated. If the unity is also one, the WIFI information of the main route will be changed to the node, and the AC+AP will be synchronized. Or Mesh products are similar, but AC+AP, AP can set WIFI independently, or can close 2.4G or 5G.

There are now 2 questions: