Today, because of the USB function of the test netware R8000P, the official website of the net piece downloaded the readycloud software and the printer sharing program, and saw the introduction of the AX wireless router of the two net parts (802.11AX, the sixth generation WI-FI standard: Wi-Fi 6). 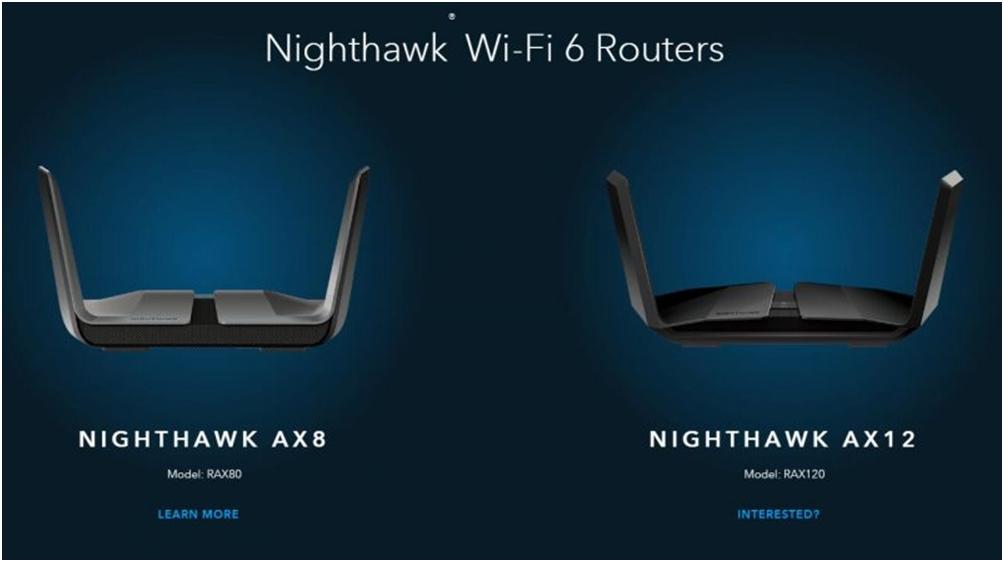 One is the Nighthawk AX8 8-Stream Wi-Fi 6 Router, model RAX80. The highest total wireless speed is about 6000Mbps;

The other is the Nighthawk AX12 12-Stream Wi-Fi 6 Router, model number is RAX120, and the maximum wireless total rate is also about 6000Mbps. These two models are not yet available in China. The NETGEAR RAX80 is available on Amazon, plus shipping and taxes, which is about 2,800 yuan, and the RAX120 is not yet available.

AX8 and AX12, “8” and “12” These two numbers Representing the number of spatial streams, the NETGEAR RAX120 is just dual-band. Why do you have 4x4mimo? Cut out the two lines of RAX120 parameters:

“Up to 8 Simultaneous WiFi Streams—8-stream MU-MIMO‡ enables up to four (4) 2×2 devices to stream content at the same time.”

The first line shows that 5G is already 8x8mimo, and the latter bandwidth is 80+80MHz, which means that it can be switched by firmware setting, running 8x8mimo mode under 80MHz bandwidth, or running in 160MHz bandwidth 4x4mimo mode. The NETGEAR RAX80 is just like the two ASUS models: the GT-AX11000 and the GT-AX88U, and the 5G is just 4x4mimo.

Because 802.11AX is backward compatible with 802.11AC, I personally guess that the NETGEAR RAX120 can run four 802.11ac 2x2mimo devices in MU-MIMO mode (80MHz, downstream). If this is the case, for the current majority of 2x2mimo 802.11ac receiving devices, such as wireless network card intel9260, intel8265, killer1535 and some MU-MIMO-enabled mobile phones, there will be an improvement in the use of experience (multi-device simultaneous play 4K, multi-device simultaneous games Reduce the delay, etc.).

The RAX120 is also equipped with a 5G network port, which is more kind than the Asus (Multi-Gig). 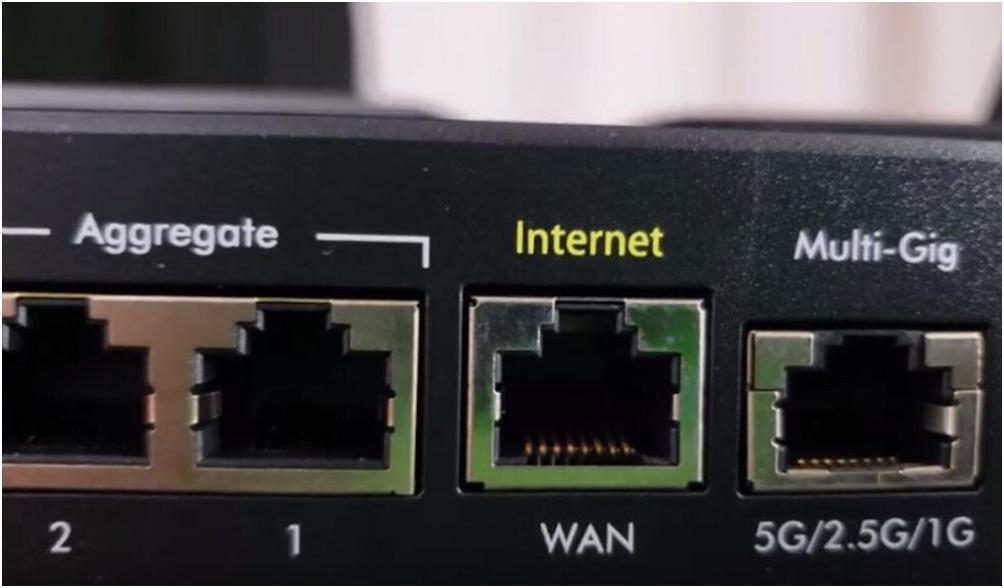 Compatible with 2.5G/1G, because I added an AQR108 network chip from Aquantia, the picture below I found on a certain computer motherboard. 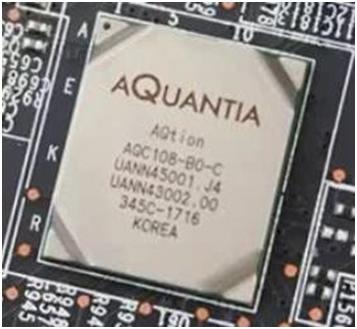 The 2.5G network chip used by the ASUS GTAX11000 is the BCM84880, and this chip supports up to 5G speed. It may be that there is a SGMII+r interface between the network port and the CPU that limits the maximum speed to 2.5G.

The device performs all physical-layer functions for 5GBASE-T, 2.5GBASE-T, 1000BASE-T, and 100BASE-TX Ethernet on Category Cat5e, 6, or 6A twisted-pair cable.

If an AX wireless network card is released in the future, the 5G wireless rate is 4804Mbps, and the 2.5G network port is not enough. The NETGEAR RX120 has a 5G LAN port, 8x8mimo, which will be my most anticipated AX wireless router. Yes, it is a Qualcomm chip, and the NETGEAR RAX80 and RAX120 are foldable.

RAX120 compares the night market, it is possible that the firmware and the WIFI 6 standard run-in.

In order to facilitate everyone’s understanding, I listed the configuration table for each of the two parts of NETGEAR and ASUS: 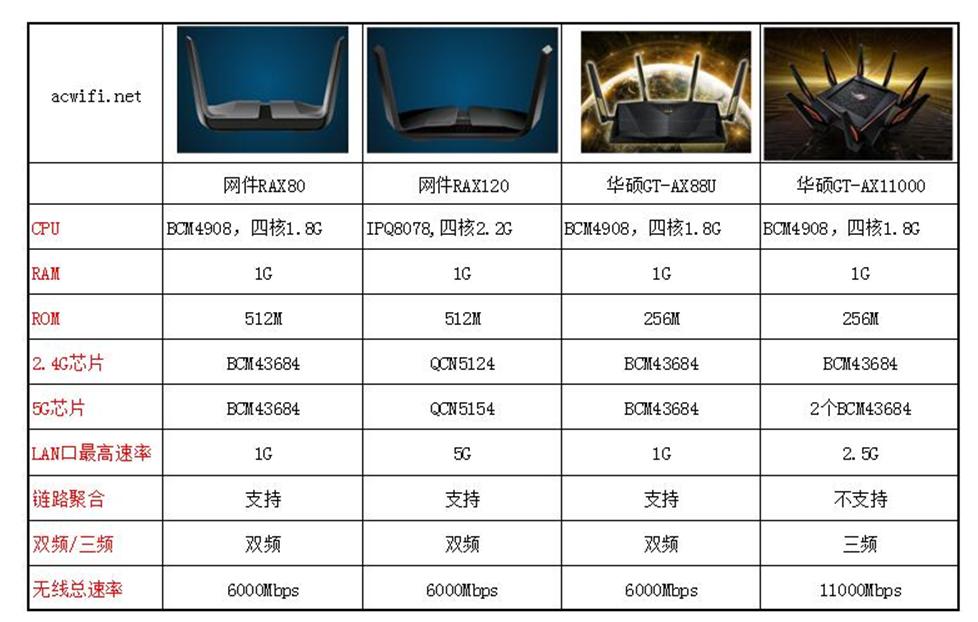 On some platforms, I saw the introduction of the AX router. There will always be some voices in the message below: not as soft routing. Please, AX is a wireless standard, what is the relationship with soft routing, you let soft routing run a program can make 802.11ac wireless network card become ax wireless AP, I will serve.

AX really appears on wireless APs, such as a WA6628 product from H3C. 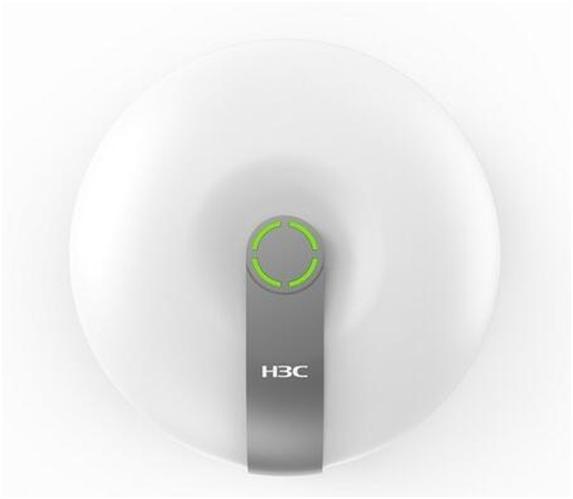 Summary: The RAX120 may enhance the existing 802.11ac wave2 receiving device experience. (because there are 8x8mimo and 5G LAN ports)

The above personal statement may be wrong, if there is something wrong, please correct me! All the equipment has not been measured, and I dare not make a conclusion. Everything must be based on the measured data.